by John Perritano
Prev NEXT
7

Use of Catch Phrases 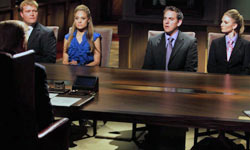 You don't have to be a fan of Donald Trump to know that "you're fired!" is a tagline from his reality show "The Apprentice."
Douglas Gorenstein/NBC

When words fail us, there's always a TV catch phrase. Whatever (or is it "whatev-ah?") the phrase, you don't have to watch a lot of television to understand its meaning. People use TV catch phrases and buzzwords all the time. We hear them at work, at church and, of course, on television. Their sources are usually obvious.

Politician Tim Pawlenty was talking to a group of Republicans in Des Moines, Iowa in early in 2011 when he said "we should tell President Obama...'You're fired.'" You don't have to be a fan of Donald Trump to know that "you're fired!" is a tagline from his reality show "The Apprentice" [source: Seattle Post-Intelligencer].

For decades, catch phrases have shaped our language. They are billboards that advertise what has captured our imagination at a specific point in time. Catch phases often appear in books, newspaper articles and in other media. They're also spread by word of mouth. Researchers say that using quotes from TV or movies in every day conversation is like telling a joke. We do it to bond with others, to make people laugh and to make us feel good about ourselves [source: Pawlowski].