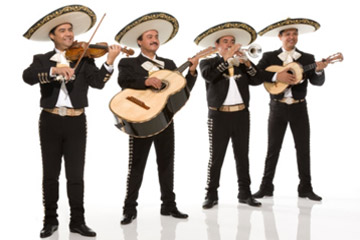 Mexico is home to some of the oldest continuous cultures in the Western hemisphere. Along with its ancient indigenous roots, Mexico has absorbed the cultural influences of centuries of foreign rule, occupation and "intervention." The invasion of Spanish conquistadors in 1519 marked the end of the Aztec empire and the beginning of the Mexican tradition. Many of Mexico's most popular traditions, holidays, music and even foods retain the imprint of both pre-Hispanic and European culture.

Think of the humble tamale. For millennia, native people in the Americas had been filling dried cornhusks with corn dough. The tamales were then steamed in a ceramic pot and eaten with a simple salsa of chilies and tomatoes or green tomatillos. When the Spanish arrived, they brought pigs, chickens, cows, rice and cheese with them. Creative cooks soon discovered that a little pork lard in the corn dough made it even more flavorful, as did some chicken or cheese in the stuffing. The blending of pre-Hispanic tradition with New World flavors (plus a side of rice and beans, of course) makes for one of the most satisfying meals in North America.

Keep reading as we explore some of Mexico's most unique and enduring traditions.

Over 8,000 years ago, the ancient peoples of the Americas began to eat the colorful seed pods of the wild, tall grasses that would grow into maiz, or corn. At first, they crushed the raw kernels and drank the sweet juice. Then, they learned to toast the corn over a fire, grind it into a powder and heat it with water to create a thick corn gruel known today as atole [source:Super].

In some unknown era, natives discovered that soaking dried corn kernels in a mixture of warm water and wood ash would remove the corn's rough skin. The soft, soaked kernel could then be ground using a lava rock mortar called a molcajete and formed into corn dough called masa. The dough, when flattened by hand and cooked over a fire, formed the world's first tortillas, a staple of the traditional Mexican diet since well before the Spanish arrived in the 16th century.

Before we get too hungry, let's talk about traditional Mexican clothing. 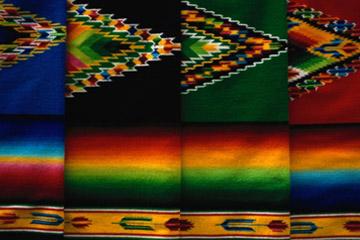 Today, the vast majority of Mexicans dress in a modern, "global" style. But you can still find examples of more traditional Mexican clothing in the many indigenous villages and communities across the country. The best examples of pre-Hispanic clothing are found on women, since men typically wore very little clothing before the Spanish conquest.

Indigenous women dress in several layers. The first is the huipil, a long, sleeveless cloak that resembles a loose dress. Over the cloak, an indigenous woman might wear a quechquemitl, an intricately woven and decorated poncho that was worn exclusively by noblewomen and priests during the Aztec empire [source: Textile Museum]. In many indigenous communities, women wear an ankle-length wrapped skirt held in place by a sash. The final piece of traditional clothing is the rebozo, a length of cloth that wraps around the shoulders and doubles as a coat or baby carrier.

Indigenous men adopted European-style pants and shirts shortly after the Spanish conquest and haven’t strayed much from that uniform ever since. The most unique aspects of male clothing are the serape and the sombrero. The sarape is a multipurpose wool cape that became famous during Mexico’s many wars and armed conflicts during the 19th and early 20th centuries [source: México Desconocido]. The serape functions as a saddle blanket, a sleeping bag and an overcoat in cold or rainy weather. Today, the serape comes in wonderfully ornate designs representing the indigenous roots of the wearer.

The sombrero is an essential article for life in the hot Mexican countryside. The traditional indigenous sombrero is woven from reeds and doesn't have the broad rim of the more ceremonial sombrero charro used by Mariachi. Both indigenous men and women wear leather sandals, and their simple cotton or wool clothing is often embroidered with intricate, colorful patterns that reflect the particular style of the home community. Even the thickness and color of the lines on a rebozo can indicate a person's home village.

Next, we'll talk about the traditional sounds of Mexican culture with an exploration of folk and popular music.

Traditional Mexican music, perhaps even more so than Mexican food or Mexican clothing, is the result of a unique intermingling of world cultures. When Hernán Cortés came ashore in 1519, his crew included professional musicians who taught the natives to play the harp and an early guitar called a vihuela [source: Clark]. Over the following centuries, the Spanish introduced more instruments from the classical European tradition, like the violin, the cornet and eventually the trumpet. While the wealthy Spanish ruling class and Catholic monks used these instruments to play cultured música, a different kind of sound was evolving in the countryside.

Son is the generic term for traditional Mexican folk music. The rhythms and melodies of son were heavily influenced by indigenous and African music as well as Spanish instrumentation [source: La Tuza]. While there are several regional variations -- son jarocho in Veracruz, son huasteco of northeastern Mexico and son calentano of south-central Mexico, to name a few -- most son music employs guitar, guiatarrón (large bass guitar), violin and a sometimes a small drum. The typical son rhythm is a brisk 6/8 or 4/4 time, as heard in the classic son jarocho tune "La Bamba," a livelier version of the song made famous by Mexican-American rocker Richie Valens.

All other Mexican musical traditions developed from the folk legacy of son. Mariachi is perhaps the most famous. Born in the western state of Jalisco in the 19th century, Mariachi music is typically played by a large traveling ensemble (10 to 20 musicians, who are also individually called Mariachi) including guitar, vihuela, guitarrón, violins, trumpets and drums. Modern Mariachi troupes often have a lead singer, although everyone in the group contributes two- or even three-part harmony. The Mariachi repertoire is composed largely of romantic ballads meant to be sung at weddings, quinceñeras, Mother’s Day and other family celebrations. The uniform of the Mariachi is a traje de charro, the tight-fitting, heavily ornamented and embroidered outfit of a horseman, complete with a broad-rimmed sombrero [source: Clark].

Ranchera music is another tradition closely tied to son or Mexican folk music. Ranchera music, which literally means "from the ranch" or the countryside, evolved during the era of the 1910 Mexican Revolution. For this reason, Ranchera music is often considered the most "Mexican" of musical forms, with many songs revolving around themes of patriotism and national pride. Many Ranchera ballads are sung in 3/4 time, based on the popularity of the polka at the turn of the 20th century. Corridos are a subset of Ranchera that tell epic tales of heroes and villains. Ranchera songs are punctuated by the infamous grito mexicano, the high-pitched yelp that has become a trademark of the form [source: Hacienda Tres Rios].

Norteño music is the traditional musical form of northern Mexico along the border with the United States. The evolution of Norteño was heavily influenced by German, Czech, Bohemian and Moravian immigrants, who popularized the use of the accordion and the tuba in Mexico [source: University of Texas at Austin]. The "oom-pah-pah" rhythms and unique instrumentation of Norteño clearly distinguish this musical tradition from Ranchera and Mariachi.

Let's finish with an exploration of some of Mexico's most unique holiday traditions.

There are a number of traditional holidays and celebrations that are unique to Mexico. Día de los muertos, or Day of the Dead, is a holiday that is equal parts pre-Hispanic spirituality and post-Conquest Catholicism. Day of the Dead is celebrated on Nov. 2 and corresponds with the traditional Catholic observance of All Souls' Day. On the days leading up to Nov. 2, indigenous families build colorful home altars dedicated to a deceased loved one. The altars are adorned with the departed’s favorite foods and drink and lavishly decorated with yellow and purple flowers. The belief, which reaches back to pre-Hispanic times, is that the recently departed has been living in a spiritual purgatory from which he or she will return home on Nov. 1, the Night of the Dead.

Far from a gloomy or scary holiday, this distinctly Mexican holiday is a celebration of the deceased and a playful wink at the specter of death. If you visit strongly indigenous towns like Patzcuaro in the state of Michoacán or Oaxaca City, you’ll see stalls selling pink, sugarcoated skulls and statues of merrily dancing skeletons. Indigenous families spend the night of Nov. 1 in the town graveyard, where they hold vigil around a brightly decorated grave and share food, drink and laughter with the living and the dead.

Christmas is also celebrated quite differently in Mexico. First of all, there’s not much talk of Santa Claus. Traditionally, Mexican children don’t even get presents on Christmas Day. Instead, they have to wait until Día de los Reyes, or Three Kings' Day, which is celebrated on Jan. 6. Three Kings' Day commemorates the visit of the Magi to the baby Jesus, during which they presented him with three gifts. Another twist on the Christmas celebration is las posadas, a reenactment of Mary and Joseph’s arrival in Bethlehem. A man and a woman (or sometimes little children) from the neighborhood are chosen to play Mary and Joseph. They’re dressed in full costume and sent out on a donkey to knock on doors asking if there’s room at the inn. After they’re turned away three times, the whole community meets for warm bowls of pozole and mugs of Mexican hot chocolate. The reenactment is often done several times leading up to Christmas.

Another important Mexican holiday, Mexico’s Independence Day, celebrated on Sept. 16. The most memorable part of the celebration actually happens on the night of Sept. 15, when families all across Mexico gather in their town squares to hear the famous grito, or "shout," of independence. On Sept. 16, 1810, a revolutionary priest named Miguel Hidalgo addressed a crowd gathered in the small town of Dolores, Guanajuato, pronouncing the beginning of the war of independence from Spain. Every year, on the night of the 15th, the president of Mexico, as well as mayors and governors across the country, reenact Hidalgo’s speech, with the crowd cheering "¡Viva México!" ("Long live Mexico!") three times in response.

For lots more information on global travel and culture, fly to the related links on the next page.

Many Americans erroneously believe that Cinco de Mayo, or May 5, is Mexico's Independence Day. In fact, Cinco de Mayo commemorates a battle in a largely unknown conflict between Mexican patriots and invading French forces in 1862. Napoleon III (the original Napoleon's nephew) had sent the army to occupy Mexico City, install a proxy ruler and expand the French empire. On May 5, undermanned and undertrained Mexican forces under the command of General Ignacio Zaragoza repelled 6,000 of Napoleon's finest troops outside the city of Puebla. Although Mexico won the battle, it was only the beginning of a prolonged French occupation that would ultimately end in 1867. As for the widespread celebration of Cinco de Mayo in America, we can only blame the marketing department at Corona.