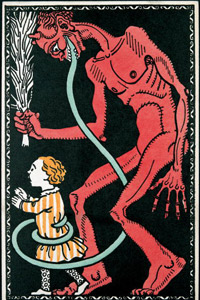 Most people are familiar with the German festival Oktoberfest. In fact, you've probably been to one. These celebrations happen all over the world and are particularly popular in America, where Oktoberfest is celebrated in 36 of 50 states. All of these facsimiles are modeled after the original, which started in Munich in 1810. The original event lasted five days and was thrown as a celebration of Bavarian Prince Ludwig's marriage. Today, Bavaria's Oktoberfest lasts 16 days, and attendees consume more than 1.3 million gallons of beer and 400,000 sausages [source: German Information Center USA]. Antacids, anyone?

Beyond Oktoberfest (hiccup) there are other German traditions that are more prevalent but less distinguishable. Let's start with Christmas. Nearly 75 years before Russian composer Pyotr Ilyich Tchaikovsky wrote "The Nutcracker", German E.T.A. Hoffman featured a nutcracker that comes to life in his play, "The Nutcracker and the Mouse King." And what's Christmas without gingerbread or advent calendars? Both of these holiday staples owe their history to German roots, as do many of the Christmas carols we sing today: "Silent Night," "O Christmas Tree" and "Away in a Manger," just to name a few.

Many of the things associated with Easter date back to Germany as well. The Easter Bunny was first mentioned as a symbol of the holiday in German writings from the 1500s [Source: Lutheran Hour Ministries]. Candy bunnies? Germany. Easter egg hunts? Germany. Easter baskets? Yep, all from Germany and all born in the early 19th century. But before you get the impression that holidays in Germany are all candy and carols, consider the legend of Krampus, the demonic creature that accompanies Santa on Christmas Eve. Rather than simply being left off the list, or receiving a lump of coal for Christmas, Krampus punished bad children.

Holidays are one thing, but Germans also know how to throw a wedding party. Since Germany has built its reputation on careful planning and exacting engineering standards, it's no surprise that this bleeds into nuptials as well -- an engaged couple is required to give the government six weeks' notice before their wedding. But once the party starts, it's not unusual for it to last up to three days. The legal part of the proceedings is the civil ceremony and can be as simple as the bride, the groom and the official.

Next comes the wedding gala, and this is where the fun really begins. Guests bring old dishes and toss them at the couple's feet, the shattering glass signifying good luck. This is called polterbend, which translated means "an evening with lots of racket." Once all of the dishes have been broken, the couple sweeps up the shards to symbolize that nothing in their marriage will be broken again. Another German wedding tradition happens when the wedding guests caravan the bride's belongings to her new home, where the groom greets her with beer (naturally).

As you can see, German culture is all around you, whether you realize it or not. From the way we celebrate holidays to the food we eat, these traditions and customs have anchored themselves in societies around the globe.