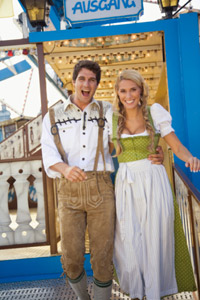 Food is one thing, but we've just begun to scratch the surface of the eccentricities German culture has to offer. If you've been to Oktoberfest, which are celebrated all over the world, you're familiar with lederhosen and dirndls. Lederhosen, which means "leather trousers" in German, are the short, leather pants worn by men. These are usually knee-length and are the historically worn by working-class German men. The dirndl is a ruffled apron dress worn by German women that consists of a bodice, or blouse, and a skirt. In the 19th century, the dirndl was the standard uniform of servant girls, but today it is mostly worn in Bavaria and Austria, and like lederhosen, usually for celebration. Each of these garments is a type of tracht, which historically was used to help identify people as members of a certain status (social, political or otherwise).

How in the world would one accessorize such things? Let's start with shoes. For the ladies, a soft, felt shoe with clunky heels and decorative buckles would typically accompany the dirndl. While not exactly clogs, these shoes would work just fine for an evening of dancing. Men would usually opt for the haferl shoe, a thick leather or rubber sole invented in Bavaria for farming. Shoemaker Franz Schratt based the design on that of animal hooves, and the word heferl, roughly translated, means "half a shoe." These were also easy on the feet, and men took great pride in the care that went into handcrafting their haferl.

The men rounded their outfits out with a typical Alpine hat, usually made of warm felt or wool, with a brim that went all the way around to offer protection from the sun. While these fashions can be found in all parts of Germany, there are subtle differences from region to region.

So, what's a German to do once he or she is all dressed up in traditional garb? Go dancing, of course. But you can't dance without music. We'll get your toes tapping in the next section, where we will discuss traditional German music.