How is Ramadan Celebrated? 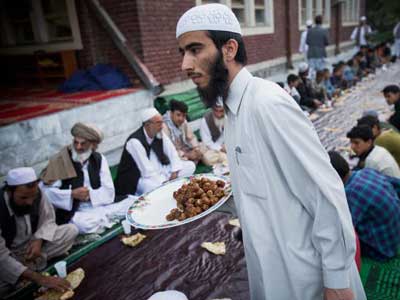 A man offers dates brought from Saudi Arabia at a mosque on the first day of Ramadan in Kabul, Afghanistan.
Daniel Berehulak/Getty Images

During Ramadan, Muslims practice sawm, or fasting. Of course, no one is required to fast for an entire month. The practice of fasting during Ramadan means that Muslims may not eat or drink anything including water while the sun is shining. Fasting is one of the five pillars or duties of Islam. As with most other religious practices in Islam, Muslims participate in the fast from the age of 12.

One of the most important aspects of the Ramadan fast is called niyyah. Niyyah literally means "intention." Muslims must not simply or accidentally abstain from food; they must achieve the requirement of niyyah. To achieve this requirement, a Muslim must "intend in heart that [the fast] is meant to be a worship for Allah alone." So, if someone fasts for political or dietary reasons, he would not achieve niyyah. In fact, according to scripture, "Whoever does not make niyyah before dawn, would not have fasted." The determination to fast is equal in importance to the fast itself.

In much of the Muslim world, restaurants are closed during the daylight hours of Ramadan. Families wake up early, before the sun rises, and eat a meal called sohour. After the sun sets, the fast is broken with a meal called iftar. Iftar often begins with eating dates and sweet drinks to give fasting Muslims a quick energy boost, and it is a rich meal. It can include any type of food, but the dessert almost always includes konafa or qattayef. Konafa is a cake made of wheat, sugar, honey, raisins and nuts. Qatayef is a similar cake, but it is smaller and is folded to encase the nuts and raisins. In between the two meals, the night-time iftar and the pre-dawn sohour, Muslims can eat freely.

Fasting is so important to Muslims for a number of reasons. First, when you are not paying attention to your mortal needs such as food, you may be able to become more in tune with God and your spiritual side. Also, the fast serves to remind Muslims of the suffering of the poor. This idea reinforces the importance of charity during Ramadan.

Fasting gives Muslims an opportunity to practice self-control and cleanse the body and mind. Many cultures and religions use fasting for this purpose. During Ramadan, fasting helps Muslims with their spiritual devotion as well as in developing a feeling of kinship with other Muslims.

As the history goes, Ramadan is the month in which Allah contacted the prophet, Mohammed, to give him the verses of the holy book, or Qu'ran. As such, praying during Ramadan is especially important. Muslims say nightly prayers whether it is Ramadan or not, but the taraweeh, or Ramadan nightly prayer, carries additional weight.

According to scripture, "Whoever observes night prayer in Ramadan as an expression of his faith and to seek reward from Allah, his previous sins will be blotted out." Thus, the Ramadan nightly prayer, after a day of fasting, serves the purpose of eradicating the sins that have been previously committed. In this way, the nightly prayer is an important element of the rituals of Ramadan.

At the end of Ramadan and before the breaking of the fast, Muslims say takbeer. The takbeer is a statement indicating there is nothing in the world that is bigger or greater than Allah. Takbeer is always said when a Muslim completes an important task, as in the completion of the fast of Ramadan.