Rosh Hashanah is one of the most important holidays in the Jewish religion. You may know quite a bit about the holiday, or you may know that it has something to do with apples and honey, and that it is a Jewish "High Holiday." Or perhaps you know nothing about it at all.

In this article, you will learn about Rosh Hashanah -- where the holiday comes from, how people celebrate it, and what the "High Holiday" period is all about.

We'll start with the most basic question: What does Rosh Hashanah celebrate?

Rosh Hashanah is many things, but most people know it as the Jewish New Year. In fact, the significance of Rosh Hashanah encapsulates four major and interconnected themes. The holiday is:

Rosh Hashanah is one of two High Holidays in the Jewish religion, the other being Yom Kippur, which occurs 10 days after Rosh Hashanah begins. These two holidays form the High Holiday period, arguably the most significant time in the Jewish year, as it marks the chance for repentance and forgiveness in the eyes of God. During the High Holidays, Jews cleanse their soul and get the chance to start fresh with an unburdened conscience and the intention of doing better in the coming year.

According to the Talmud, God created mankind on the first day of the month Tishri. As such, Rosh Hashanah commemorates the creation of the human race. It is a time for cleansing and renewal, a chance to receive forgiveness and clear the slate. The importance of the holiday is reflected in its two-day observance; most Jewish holidays are celebrated for only one day.

Rosh Hashanah, literally translated as "head of the year," is considered the Jewish New Year. But the holiday does not fall on the first day of the first month of the Jewish calendar. Rosh Hashanah begins with the first day of the seventh month, Tishri, and so is something of a symbolic New Year (at least in terms of what most people think of as "New Year's"). It is actually one of several New Year observations that occur throughout the year, and this particular New Year marks the opportunity to put the sins of the previous year in the past, and move forward having received God's forgiveness.

In this way, Rosh Hashanah is the Day of Judgement. One of the most prominent themes of the holiday revolves around the symbolic "Book of Life." A Jew's life depends on whether or not he or she makes the decision to make amends during the High Holiday period through the means of repentance (teshuvah), prayer (tfiloh), and charity (tzedakah). It is a key moment, a time to reflect on past mistakes and resolve in front of God to not repeat them in the coming year. It is also a celebration of man's free will -- making the conscious decision to look inside oneself, to look truly at one's life and make amends. In exercising this choice, which was given to him by God, man makes himself worthy of God's mercy.

On Rosh Hashanah, Jews often say to one another, "May you be inscribed and sealed in the Book of Life." The High Holiday period is a choice between life and death, righteousness and sin, and those who repent are on their way to being inscribed in the "Book of Life," which brings with it the promise of a good year. The belief is that on Rosh Hashanah, the names are written in the book, and on Yom Kippur (10 days later) the book is sealed. These 10 days are referred to as the Days of Awe.

As the Day of Remembrance, Rosh Hashanah recalls the story of Isaac's near-sacrifice, which Jewish tradition states occurred on the first of Tishri. In this biblical account, God commanded Isaac's father, Abraham, to sacrifice his only son as an offering. Abraham accepts God's command, builds an altar, and prepares to sacrifice his son to prove his obedience and faith in God. At the very last minute, an angel conveying God's wishes stopped Abraham from killing Isaac, and pointed out a ram caught by its horns in a nearby bush. The angel told Abraham to sacrifice the ram in place of Isaac -- Abraham had passed God's test.

As a result, God blessed Abraham. This story is recalled on Rosh Hashanah to remind Jews that submission before God is the way to attain God's mercy, and the truly righteous do not question God's will. They do as God commands and are rewarded for their faith.

The shofar comes in many shapes and sizes.

The last of Rosh Hashanah's main symbols is the shofar, which is a hollowed out ram's horn. The Day of Shofar Blowing has several implications, but there are at least three widely recognized meanings. One is to recall the story of Isaac -- of God sparing his life as a reward for Abraham's faith -- and to remember the ram that was sacrificed in Isaac's place.

Aside from recalling the story of Isaac, the shofar also calls to mind a coronation of sorts. Inasmuch as Rosh Hashanah is a celebration of the creation of human beings, it is also a celebration of God's kingship over human beings. The blowing of the shofar announces and reaffirms God as ruler of all mankind. The "trumpet-like" sound of the shofar also serves to stir the soul of all Jews, to awaken the Jewish people to the omnipotence and omnipresence of God and the chance to receive his mercy through prayer and repentance.

To hear what a shofar sounds like, visit this page from Torah Tots and scroll down to "The Shofar."

For more information, see Judaism 101: Jewish Calendar and Calendars Through the Ages: The Jewish calendar.

How is Rosh Hashanah Celebrated? 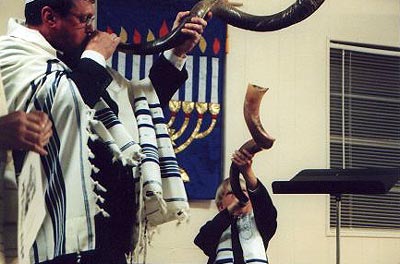 The shofar is blown in the synagogue during Rosh Hashanah services.

Rosh Hashanah is celebrated in lots of different ways, and even in different ways by different kinds of Jews (see "Divisions of Judaism" below). There are, however, certain methods and traditions that are basic to the observance of Rosh Hashanah, and so are part of almost any celebration of the holiday.

As for the more formal aspects of Rosh Hashanah, what goes on in the synagogue during this holidays is a departure from the "standard" Friday-night and Saturday-morning services of the weekly Sabbath (Shabbat). High Holiday services are longer than Sabbath services, often starting earlier in the morning and lasting well into the afternoon. Also, Jews use a special prayer book -- called the Machhzor -- in Rosh Hashanah (and Yom Kippur) services. The Machzor contains the specific prayers of the high holidays and further sets this time apart as especially important.

There are several prayers that are central to the observance of Rosh Hashanah:

The shofar is blown with accompanying prayers (see this page from Torah Tots and scroll down to "The Shofar.") There are specific ways of blowing the shofar, meant to awaken Jews to God's judgement and affirm God's position as judge and king.

The Torah readings for Rosh Hashanah relate both the birth of Isaac -- to Abraham and Sarah, who was believed to be barren until one day, at the age of 100, God blessed her with a child -- and Isaac's near-sacrifice, when God spared his life because Abraham proved his absolute faith is God's word.

Other Prayers and Customs

In another Rosh Hashanah practice, known as Tashlich, Jews say particular prayers as they toss breadcrumbs (or something similar) into a moving body of water. The breadcrumbs are meant to symbolize a person's sins, which are then washed away.

The practices of candle lighting and saying kiddush -- a blessing over wine -- are holy acts in Judaism for "bringing in" the Sabbath and any other holy days. For Rosh Hashanah, the candles (usually two) are lit with special prayers or prayer melodies to signify the specialness of the holiday. The Challah, a special bread that also accompanies the celebration of Shabbat, on Rosh Hashanah is round instead of twisted. This symbolizes both the unending circle of life and the crown of God's kingship over man. Some people brush the Challah with honey when it is baking, instead of salt; this change signifies the Rosh Hashanah wish for a "sweet New Year," also present is the custom of dipping apples in honey. In fact, all sorts of especially sweet foods are eaten on Rosh Hashanah.

It is customary on Rosh Hashanah to set the dinner table with one's finest linens and china, and to wear new, special clothing to express the importance of the occasion. In Sephardic tradition, many people place covered baskets of fruit on the table -- covered so that no one knows exactly which fruits are inside, much like one never knows just what the coming year will bring.

For more information on Rosh Hashanah and related topics, check out the links on the next page.

As with most major religions, their are many different sects within Judaism. One major division is along the lines of geographical ancestry. Ashkenazi Jews may draw their roots to Eastern Europe and Russia, and it is the Askenazim who spoke (and may still speak) Yiddish. Phrases like oy vey (difficult to translate, but something like saying "alas") and words like kvetch (to complain) and nosh (to have a snack) come from the Yiddish language. Sephardic Jews may trace their ancestors to Spain, Northern Africa, and the Middle East. The distinction is a fairly loose one, and primarily indicates differences in culture, customs, and perhaps focal points in the practice of Judaism.

Another set of lines is drawn between different levels of Judaism, basically organized by how literal and unchanging one's interpretation of the Torah is. The most recognizable sects in this regard, listed from most to least literal and unchanging, are Orthodox, Conservative, Reform and Reconstructionist. For information on these and other movements, see soc.culture.jewish FAQ: Who We Are.

5 Things You Should Know: Halloween Safety Tips for Kids and Parents
5 Timeless Costume Ideas for Young Kids
Why Do We Celebrate Labor Day?