Christian Roots: All Saints' Day and All Souls' Day 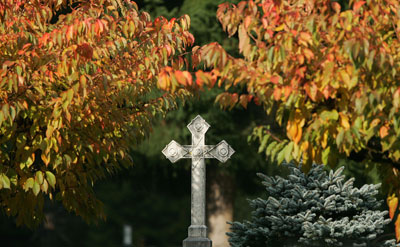 All Saints' Day was established in order to honor all of the saints at one time. It is celebrated on November 1.
A. Josch/AFP/Getty Images

Christians have been honoring their virtuous dead from the earliest days of the religion. In traditional Roman Catholicism, exceedingly virtuous men and women may be canonized as saints in the afterlife. Since they are endowed with holiness, saints are close to God, and may perform miracles on earth. Roman Catholics, and some other Christians, honor saints and ask them for guidance in daily life. (See How does someone become a saint? to learn more about sainthood.)

­Catholics commemorate many saints on their own "saints day," often the anniversary of their death. But with thousands of canonized saints, only a small percentage are recognized regularly. In the seventh century, Pope Boniface IV officially established All Saints' Day in order to honor all the saints at one time. History records such a sacred day before Boniface's time, but it wasn't widely observed.

Originally, Christians observed All Saints' Day on May 13. But in the eighth century, Pope Gregory III moved it to November 1. Officially, the Church chose this new date to mark the papal dedication of a church honoring the saints. But many historians believe the Church really moved the observance to correspond with Samhain and other pagan fall festivals.

The Catholic Church had a long-standing policy of incorporating non-Christian traditions into its holidays in order to bring people into the Catholic faith. This included moving the dates of Christian holidays to those of established non-Christian occasions. Many historians believe, for example, that the church set Christmas on December 25 so that it would correspond with pagan winter solstice festivals.

In any case, when All Saints' Day moved to November 1, the church did begin to incorporate Samhain traditions into the holy day's activities. This helped bring descendants of the ancient Celts into Christianity, but it posed some problems for the church. Much of the Samhain traditions centered on the supernatural and spirit world, ideas that don't have much of a place in Christianity. Recognizing saints, who were by definition deceased, covered a lot of the same ground, but the converts were still fascinated by the idea of their familiar dead returning to the world of the living.

Despite some unease in the church, many supernatural ideas persisted in All Saints' Day Eve celebrations, making the occasion a remarkable combination of Christian and pagan beliefs. At the end of the 10th century, the church tried to give these traditions a little more direction by establishing All Souls' Day, an occasion to recognize all Christian dead.

All Souls' Day, observed on November 2, is celebrated with Masses and festivities in honor of the dead. The living pray on behalf of Christians who are in purgatory, the state in the afterlife where souls are purified before proceeding to heaven. Souls in purgatory, who are members of the church just like living Christians, must suffer so that they can be purged of their sins. Through prayer and good works, living members of the church may help their departed friends and family.

After its introduction, this holiday did sate many Catholics' interest in death and the supernatural. But the unchristian idea of wandering spirits persisted in some areas, as did the festivity atmosphere of Samhain. Conceding that they could not completely get rid of the supernatural elements of the celebrations, the Catholic Church began characterizing the spirits as evil forces associated with the devil. This is where we get a lot of the more disturbing Halloween imagery, such as evil witches and demons.

All Souls' Day lives on today, particularly in Mexico, where All Hallows' Eve, All Saints' Day and All Souls' Day are collectively observed as "Los Dias de los Muertos" (The Days of the Dead). First and foremost, the Days of the Dead is a time when families fondly remember the deceased. But it is also a time marked by festivities, including spectacular parades of skeletons and ghouls. In one notable tradition, revelers lead a mock funeral procession with a live person inside a coffin.

This masquerade is closely connected to the celebration of Halloween, as are other elements of All Souls' Day. In the next section, we'll see how one early All Souls' Day ritual may have led to modern trick-or-treating.