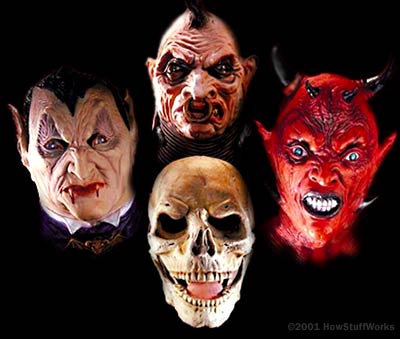 ­Since the 1800s, when Irish and Scottish immigrants brought their Halloween festivities to North America, the holiday has evolved considerably. The celebration's connection with All Saints' Day and All Souls' Day has mostly fallen by the wayside, and a number of new secular traditions have developed.

­For children, dressing up and trick-or-treating door-to-door is still the main event. Most households in the United States and Canada participate, and those who don't run the risk of petty vandalism. Many adults dress up themselves, to go out with their children or to attend costume parties and contests.

Halloween continues to be extremely popular with kids of all ages; 85 to 90 percent of U.S. children go trick-or-treating or engage in other Halloween festivities every year, and many adults also join in on the fun. In a 2000 poll, the National Retail Federation found that 65 percent of U.S. adults between 18 and 34 attended Halloween costume parties or other celebrations. ­

Other Halloween activities fill the whole month of October. These traditions preserve Samhain's spirit of revelry in the face of frightening thoughts of death and the supernatural. Americans have added scary movies, community haunted houses, ghost stories and Ouija boards to the celebration. Greeting cards and festive decorations are also a big part of Halloween. The holiday is second only to Christmas in total revenue dollars for retailers.

­In the United States, Halloween lags just behind New Year's Eve and the Super Bowl in total number of parties, and it's second only to Christmas in total consumer dollars spent. According to the National Retail Federation, U.S. consumers spent an average of $44 per household in 2002 on Halloween candy, costumes and decorations. Families with young children spent an average of $62. The 2002 holiday brought in about $6.9 billion in sales in the United States.

Another common Halloween custom is collecting money for the United Nations Children's Fund (UNICEF), in lieu of or in addition to candy. This started in 1950 in Philadelphia, when a Sunday school class had the idea of collecting money for needy children when trick-or-treating. They sent the money they made, about $17, to UNICEF, which was inspired by the idea and started a trick-or-treat program in 1955. Interested churches, schools and parents can order special orange-and-black collection boxes, along with materials explaining the UNICEF program. To learn how you can participate, check out the Trick-or-Treat for UNICEF Web page.