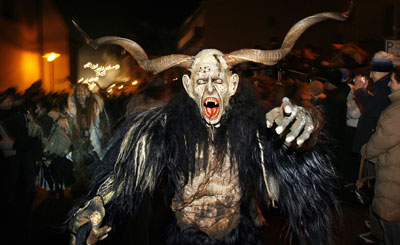 ­Although Halloween comes in part from Christian tradition, many Christian groups want nothing to do with the holiday because of its pagan elements. Prominent Halloween figures, such as witches and ghouls, carry an uncomfortable satanic connotation to some Christians, and they do not want to expose their children to these images. Some groups are also disturbed by the origins of the holiday, as it is a common belief that the Samhain festival was a celebration of a devil-like god of the dead called Samhain. Most evidence suggests that this is not actually the case -- the main documentation for such a god comes from material apparently produced by the Catholic Church hundreds of years ago, as a means of converting people away from Druidism.

Christian groups are also disturbed by rumors that modern day Wiccans and Druids observe Halloween as an occasion to worship Satan or other evil forces. The established organizations of these groups completely disavow all knowledge of such practices, though they do say that Halloween is an important day of the year in their religion. Every year, there are some reports of satanic rituals and even animal sacrifices, but most of these stories prove to be fabrications. Any actual sacrifices are the practices of individuals and smaller extremist groups, operating outside any larger organization.

Many Wiccans, modern-day witches, get upset around Halloween because they feel that they are misrepresented by a few Christian spokesmen and the news media. They want to separate their religion from the popular notion of witches as evil figures in league with the devil. They say that modern witchcraft is based on ancient Wiccan and Druid beliefs that had nothing to do with Satan or other figures from Judeo-Christian theology. Wiccans say that their religion is based on a connection to nature and the universe, not to dark forces and evil spells as the popular idea of a witch suggests.

More generally, Halloween is controversial because some parents think it is an inappropriate, possibly dangerous holiday for children. In modern society, children are in some physical danger when they go trick-or-treating because they are walking around neighborhoods in the dark, accepting candy from strangers. The frightening imagery surrounding Halloween is also a concern. Many parents fear that monsters and ghosts are too disturbing to children, noting that younger trick-or-treaters have a hard time distinguishing between fantasy and reality and may be overwhelmed by people in monster costumes. In recent years, more and more parents have steered away from trick-or-treating, taking their children to school or church Halloween parties instead.

This is a tough issue for parents, because they often have very fond memories of trick-or-treating when they were children, but don't feel comfortable taking their own kids out. They say that Halloween was less frightening when they were kids because it was mostly about dressing up in fun costumes, and children weren't exposed to as much disturbing imagery in popular culture. Modern horror movies have become a particularly sore point for concerned parents, as they are usually extremely violent.

Others note that many aspects of Halloween are important to children. Dressing up can give a shy child a boost of self-confidence, and trick-or-treating may create a healthy feeling of community in a neighborhood. Most of all, adults who love Halloween would hate to see their favorite traditions phased out, because they remember how much they enjoyed them when they were kids. At this point, Halloween does seem to be headed for some changes, but there are many different ideas of what these changes should be.