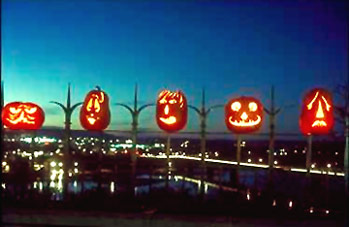 Jack-o-lanterns come from the Celtic ritual of carrying an ember in a hollow turnip. Learn about Stingy Jack and the tradition of Halloween jack-o-lanterns.

As part of the Samhain celebration, Celts would bring home an ember from the communal bonfire at the end of the night. They carried these embers in hollowed-out turnips, creating a lantern resembling the modern day jack-o'-lantern.

­But the direct predecessor of jack-o'-lanterns dates from 18th-century Ireland, where ancient Celtic traditions remained a significant part of the national culture. A very popular character in Irish folk tales was Stingy Jack, a disreputable miser who, on several occasions, avoided damnation by tricking the devil (often on All Hallows' Eve). In one story, he convinced Satan to climb up a tree for some apples and then cut crosses all around the trunk so the devil couldn't climb down. The devil promised to leave Jack alone forever, ­if he would only let him out of the tree.

When Jack eventually died, he was turned away from Heaven, due to his life of sin. But, in keeping with their agreement, the Devil wouldn't take Jack either. He was cursed to travel forever as a spirit in limbo. As Jack left the gates of Hell, the Devil threw him a hot ember to light the way in the dark. Jack placed the ember in a hollowed-out turnip and wandered off into the world. According to the Irish legend, you might see Jack's spirit on All Hallows' Eve, still carrying his turnip lantern through the darkness.

Traditional jack-o'-lanterns, hollowed-out turnips with embers or candles inside, became a very popular Halloween decoration in Ireland and Scotland a few hundred years ago. Folk tradition held that they would ward off Stingy Jack and other spirits on Halloween, and they also served as representations of the souls of the dead. Irish families who emigrated to America brought the tradition with them, but they replaced the turnips with the more plentiful pumpkins. As it turns out, pumpkins were easier to carve than turnips. People began to cut frightening faces and other elaborate designs into their jack-o'-lanterns.

In the next section, we'll look at another popular Halloween food tradition: bobbing for apples.

Pumpkins, which are actually fruits, not vegetables, range considerably in size. Some varieties weigh less than a pound, while giant pumpkins can grow to more than 1,000 pounds! Pumpkins are members of the gourd family, which also includes watermelons and zucchini. They are 90-percent water and also contain high concentrations of potassium and vitamin A.

­Pumpkins, which grow from vines, originated in Central America and were a popular crop among Native Americans. Some tribes used the seeds for food and medicine and made sleeping mats out of dried pumpkin strips. American colonists invented the pumpkin pie, but their original version used the pumpkin as the crust, not the main ingredient. They cut off pumpkin tops to make handy edible bowls, which they filled with milk, honey and spices and then cooked over a fire or hot ashes.