Browse the article Why do Christmas carolers walk around the neighborhood singing? 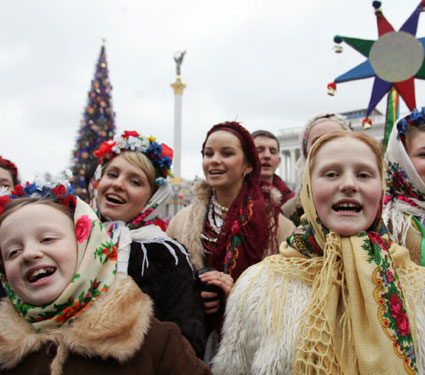 The idea of Christmas caroling brings to mind jolly bands of churchgoers, dressed in shawls and top hats, going door-to-door, also known as wassailing -- an Old Norse term -- to spread the spirit of Christmas through hymns. Whether it's "Deck the Halls," "Joy to the World" or "Silent Night," Christmas carols provide the soundtrack to the holidays.

Carolers have been known to travel on foot, by truck or on horseback. Despite a recent re-examining of caroling's political correctness, including one incident where carolers were banned from marching in a prominent parade in Denver, it remains a popular Christmas tradition [source: The Denver Channel]. But how exactly did this tradition begin? Who wrote the carols? And why do we feel compelled to sing them on the front porch of a total stranger's home?

The root of the word "carol" lies not in song, but in dance. In Old French, "carole" means "kind of dance." In Latin, "choraula" means "a dance to the flute," and in Greek, "choraules" means "flute player who accompanies the choral dance." Although there are some carols centering around religion, the song were originally secular -- up-tempo melodies with alternating choruses and verses associated with traditional dances. Like many other Christmas traditions, caroling is also thought to have its roots in the pre-Christian celebration of the Festival of Yule, when Northern Europeans would come together to sing and dance to honor the Winter Solstice. As carols evolved into a Christian tradition, they became hymns, having little relation to any type of dance.

In the next section, we'll look at the history of caroling and why it's sometimes called "wassailing." 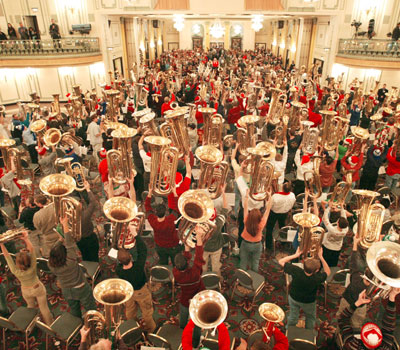 There's no definitive history behind Christmas caroling. Where they originated, who wrote them and how they evolved is unclear. Caroling is an oral tradition, passed down from generation to generation.

Carols commemorating the nativity, or birth of Jesus Christ, were purportedly first written in Latin in the 4th and 5th centuries, but they didn't become associated with Christmas until the 13th century. Saint Francis of Assisi, the Roman Catholic saint of animals and the environment, is often credited with incorporating upbeat Latin hymns into Christmas services. The energetic, joyful carols were sung in sharp contrast to the somber Christmas music of the day. The concept of Christmas carols, and spreading them to the community to celebrate Christ's birth, is thought to have spread across Europe.

Today, many caroling groups sing for charity in churches and neighborhoods; some historical accounts claim this is rooted in feudal societies, when poor citizens would "sing for their supper" in exchange for food or drink. Another theory is that carolers traveled door-to-door because they were not originally allowed to perform in churches. Others say this idea didn't develop until the 16th century, when Anglo-Saxon peasants adapted these pagan customs when they went wassailing, requesting nourishment from their superiors in exchange for singing good tidings.

Wassail was a thick, hot spiced beverage that helped keep the traveling well-wishers warm; in its heyday, the drink was just as much of a holiday tradition as eggnog is in modern times. As wassailing evolved, with children often going door-to-door, it became more associated with Christmas and caroling. Oliver Cromwell banned Christmas celebrations in England from 1649 to 1660 (he believed Christmas should be a serious holiday, and celebrated accordingly), and caroling did not experience a surge in popularity until the 19th century, when it's thought that the joyful, expressive hymns were well-received in the Victorian Era.

A common legend says that Christmas carols were named after Carol Poles, a little English girl who supposedly went missing in London during the holiday season in the late 19th century. People supposedly searched for her by going door-to-door, singing to declare their good intentions. Although it may be a nice story, it has no factual basis. 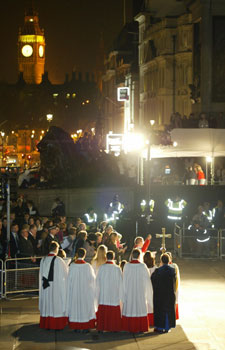 Hundreds of Christmas carols have been penned over several centuries, but only a few have achieved legendary status. Here are a few:

Considered by some to be the most famous Christmas carol of all, "Silent Night" has varying legends behind its origin. The most famous legend involves Austrian priest Joseph Mohr, who composed the song with friend Franz Gruber on Christmas Eve despite the fact that their church organ was broken. "Silent Night," translated as "Stille Nacht" in German, was written in time for the church's midnight mass in the Bavarian town of Oberndorf. While the details of the story are unclear, and some believe parts are embellished or altogether untrue, Mohr and Gruber are credited with adapting "Silent Night," originally a poem written by Mohr, into a legendary Christmas carol.

"The Twelve Days of Christmas"

The carol has its roots in 18th-century England, as a memory-and-forfeit game sung by British children. One theory, however, believes that the carol was a catechism song for Catholics to learn "the tenets of their faith," as they could not openly practice in Anglican society from 1558 to 1829 [source: Snopes]. There is no substantive evidence that this was the case, nor is there any evidence that the verse symbolism contains anything uniquely Catholic.

Also known as "O Christmas Tree," this carol originated in Germany, perhaps in the early-19th century, but the exact roots are unknown. While the hymn pays homage to what has become a universal symbol of Christmas, its melody is mimicked in the state anthems of Iowa, Maryland, Michigan and New Jersey.

"Joy to the World"

This carol is different from many in that it contains overt Christian imagery (Joy to the World, The Lord is come / Let earth receive her King). Its lyrics originated in the Old Testament as published in Isaac Watt's 1719 translation of the Psalms of David, but it was American composer Lowell Mason who crafted the melody in the 19th century.

Englishman John Francis Wade is credited with the words and collaborated with John Reading to give the hymn a melody and published it around 1751. It became a popular church hymn a century later when Frederick Oakeley translated it into English from Latin.

For more information about Christmas and related topics, visit the next page.

What is Figgy Pudding?

Figgy pudding is a British dessert, also famous for being served by Mary Cratchit in Charles Dickens' "A Christmas Carol." It is often compared to a cross between carrot cake and custard and contains eggs, cream, sugar, spices and chopped figs, among other ingredients. Recipes vary, but the dessert has a unique texture and taste, one which was apparently worth waiting around for in the Victorian age.