What is the biggest family tree ever assembled? 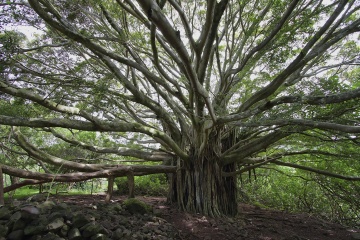 A "genome hacker" has compiled the biggest family tree thanks to data readily available on Geni.com.
estivillml/iStock/Thinkstock

In 2005, the Guinness Book of World Records recognized the Confucius genealogical line as the longest family tree in history, with 86 recorded generations over 2,500 years. The Chinese philosopher (551 to 479 BCE) is thought to have 3 million descendants all over the world. Two million of them are registered (although not DNA-tested) in "The Confucius Genealogy," an 80-volume set published in 2009 [source: Zhou].

But what about the biggest family tree? A British man named Roy Blackmore is often credited with the largest family tree filled out the old-fashioned way, through years of legwork and exhaustive research (mostly on paper, without the Internet). He claims to have worked on his tree five hours a day for 28 years, eventually finding more than 9,000 ancestors over 1,500 years and 45 generations [source: Simpson].

But all amateur genealogists, no matter how painstaking and impressive their efforts, will forevermore be trumped by the work of the "genome hacker," Yaniv Erlich, and his team of researchers from the Whitehead Institute for Biomedical Research at MIT. They've amassed a family tree with an astounding 13 million people from the past 500 years or so who have the same genetic pedigree. And they did it by harnessing the power of social media.

Erlich and his team didn't initiate this project just to see how big they could make this worldwide family tree. Their purpose was (and is) to analyze the genetic information in an extremely large family (which is what this group of 13 million people is, as strange as it may seem). They wanted to examine, among other things, longevity, fertility and migration patterns, and the bigger the pool, the better. They obviously weren't about to start digging through 500 years of church records, obituaries and birth announcements, and trying to recruit large families wouldn't be worth the tremendous effort. They'd get maybe a few thousand participants, which just wasn't enough. So they turned to a source that previous generations of genealogists could only dream about, and it turned out to have a huge payoff.

Geni.com is the largest genealogy-focused social network, with 43 million public profiles available to anyone who'd like to check them out [source: Ledford]. The profiles generally contain a name, birth and death dates, location and sometimes photos. Erlich's team used the information to link the profiles into family trees — some topped out at a few thousand, but one grew to 13 million. The researchers then spent a year organizing the data and ultimately offered their findings to the public at FamiLinx, a "database of crowd-sourced genealogy" [source: FamiLinx].

As more and more people get turned on to crowd-sourced genealogy and submit their information to sites like Geni.com and FamiLinx, it's not hard to imagine a day when 13 million might end up seeming like a small family tree.