Can Ellis Island help track down your genealogy? 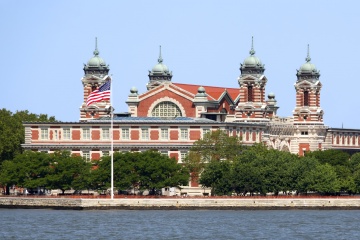 It's now easier than ever to search for ancestors who passed through Ellis Island on their way to a new life in America.
Vladone/iStock/Thinkstock

Ellis Island, a tiny spot of land located off the southern tip of Manhattan, was the entrance point into the United States for more than 12 million immigrants between 1892 and 1954 [source: Statue of Liberty-Ellis Island Foundation]. During the largest human migration in modern history, this processing center handled more immigrants than all other North American ports combined. About 40 percent of Americans have at least one ancestor who entered the country there [source: Smolenyak]. So, if you want to learn more about your family tree and you don't know where to start, it can't hurt to check out Ellis Island — especially if you know of any relatives who came to the U.S. from Europe in the first half of the 20th century.

The Ellis Island Immigration Museum has been open to the public since 1990, and visitors can physically search through the center's vast archives to find passenger information and learn more about their ancestries. That often tedious and time-consuming process became infinitely easier when the archives were digitized and made available online in 2001. Everything from 1892 to 1924 is searchable online now, and records up to 1957 will be available in 2015.

The Ellis Island Archives contain the ship manifests (lists of passenger information) for more than 51 million people who passed through Ellis Island and the Port of New York. Some passenger records are more complete than others, but they can reveal name, age, date of arrival, ship name, nationality, birthplace, occupation, last residence overseas and final destination. You also might be able to see a picture of the actual ship your ancestor traveled on — the database has more than 900 ship images [source: Statue of Liberty-Ellis Island Foundation].

All you need to get going is a name, but your search will obviously be a lot easier and more accurate if you start off with more information. If you have only a name to work with — and that name happens to be John Smith — you're going to be wading through thousands of records with no clue as to which John Smith is your great-grandfather. Even more-uncommon names could give you hundreds of results. So try to dig up anything else before you head to the Ellis Island database: your relative's possible travel companions, her hometown or possible dates of travel. The site also has an ingenious option to search all possible surname spellings because so many names were changed during the highly inexact recording process, over the years as families assimilated into a new country and possibly in the painstaking record retrieval a hundred years later.

Once you've taken all the information you can from Ellis Island, you can go forward — or backward, as the case may be — with your ancestry research. Armed with the wealth of names, places and dates you might be able to find, you should be able to fill many holes in that family tree.