Are millions of modern humans the direct descendants of Genghis Khan? 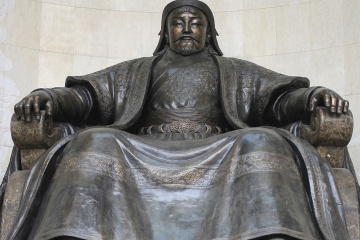 Genghis Khan's habit of killing a lot of men and engaging in a lot of procreation means a large chunk of the population shares his genes.
Rachel Fox/iStock/Thinkstock

Back in the late 1990s, a team of international geneticists researching the genetic history of a number of Asian populations stumbled across a very unusual Y-chromosome mutation. They found that it occurred in about 8 percent of the males in 16 of the populations — a pretty large percentage, as far as genetic mutations go. Upon further investigation, the team computed that the most recent common ancestor of the mutated group lived about 1,000 years ago.

That 8 percent converts into 0.5 percent of the male population of the world, which made this unknown man the direct ancestor of about 16 million men around the globe [source: Zerjal]. That's a whole lot of descendants to amass over a relatively short period. So the geneticists knew the phenomenon was caused by more than just natural selection or biological advantage. It was more likely transmitted through a very rare occurrence of social selection: Somehow, the males in the lineage had attained increased reproductivity, and unrelated males had been at least partially eliminated.

As it turns out, the 16 populations were in countries (China, Mongolia, Uzbekistan, Kazakhstan, Russia, Afghanistan, Pakistan, Iran and Iraq) that had been part of the Mongol Empire, the territory of Genghis Khan. The highest concentration was in Mongolia itself, and there was also a tribe in Pakistan with high frequencies of the mutation. This tribe happens to have a long history of claiming to be directly descended from Genghis Khan. So all arrows started to point to the notoriously brutal empire-builder as the perpetrator of this social upheaval.

Genghis Khan wasn't the first man to have this mutation — it probably started with one of his great-great-grandfathers — but he certainly set the wheels in motion for its rapid spread. The Mongols are still infamous for their pillage-and-plunder tactics, routinely slaughtering the men in the populations they conquered. (Elimination of unrelated males? Check.) They also took the women for their own, making them concubines or collecting them into harems. The direct Khan descendants got their pick of the women and tended to have overwhelming amounts of children. Khan's son Tushi was said to have had 40 sons. (Increased reproductivity? Check.) This pattern continued for hundreds of years — it was, the researchers said, "selection based on social prestige" [source: Zerjal].

The only way to definitively confirm this theory is to perform DNA testing on Genghis Khan's remains, which is most likely never going to happen, but the geneticists do make a good case that Genghis Khan is the direct ancestor of .5 percent of the world's male population.

But wait ... it's just the men we're talking about here. The Y-chromosome is passed directly from father to son (it's the only part of the genome that doesn't combine with the mother's genes), so it's the easiest and best way to track paternal lineage.There is no Y-chromosome equivalent that allows similar documentation of maternal lineage, so there's no way of knowing exactly how many women are also part of the Khan clan. Sorry, ladies.