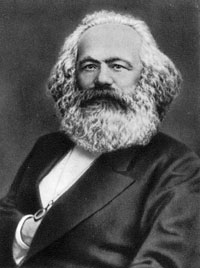 The political theory of socialism, which gave rise to ­communism, had been around for hundreds of years by the time a German philosopher named Karl Marx put pen to paper. Marx, also known as the father of communism, spent most of his life in exile in Great Britain and France. He wrote the Communist Manifesto in 1848, which later served as the inspiration for the formation of the Communist Party. Communism is also known as "Marxism."

Marx believed that a truly utopian society must be classless and stateless. (It should be noted that Marx died well before any of his theories were put to the test.) Marx's main idea was simple: Free the lower class from poverty and give the poor a fighting chance. How he believed it should be accomplished, however, was another story. In order to liberate the lower class, Marx believed that the government would have to control all means of production so that no one could outdo anyone else by making more money. Unfortunately, that proves to this day to be more difficult than he might have realized.

In the communist society that Marx described, the government has supreme authority through its total control of land and means of production. Because the government distributes land and property among the people, communism sets a standard of equality -- both economically and socially -- among its followers.

­The system seems to work in theory, but how did communism work in practice? Read on to learn about the rise of the first communist nation.