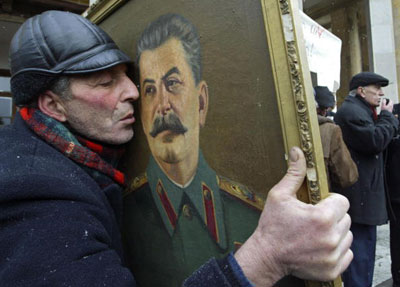 At a rally marking Stalin's 128th birthday anniversary on Dec. 21, 2007, a man holds a portrait of the Soviet dictator.
VANO SHLAMOV/AFP/Getty Images

When Lenin died in 1924, Joseph Stalin came into power and managed to target one of the only groups that Lenin never did: fellow communists. In Stalin's eyes, anyone who didn't back him 100 percent was an enemy. He purged many members of the Communist Party for a range of crimes, including treason, political deviations and espionage. When all was said and done, Stalin ordered the deaths of nearly all of his Bolshevik comrades, including Trotsky.

Stalin took Lenin's methods of terrorizing the people a few steps further. Whereas Lenin let people starve to death, Stalin used famine to further his political goals. He took back the land that Lenin had turned over to the peasants through the New Economic Policy and forced collectivization of agriculture in the U.S.S.R. The peasants resisted and crop production diminished even more than during Lenin's reign. Widespread famine continue to kill millions of people, and during the Great Terror of 1936-1939, Stalin ordered the executions of millions more.

Stalin wanted to take communism worldwide. He knew that in order to do so, he would have to industrialize Russia. Stalin built factories in strategic places so they would not be vulnerable to outside enemies. He built so many so quickly that Russia soon surpassed many other major countries in industry. His legacy continued well after his death.

Several other dictators came into power after Stalin's death, including Nikita Khrushchev and Leonid Brezhnev. The Soviet people continued to perish at an alarming rate. From 1953 to 1991, people ­were put to death for political offenses, and as recently as the 1980s, slave labor camps were still inhabited by detractors.

While communist theory and practice was alive and well in some parts of the world, other nations strived to contain the movement. Read on to learn how the Soviet Union eventually crumbled.

The main ideal of communism is expressed through the symbols chosen to represent the movement. The hammer and the sickle (a farming tool with a hooked blade used to cut grain) are the two main party symbols. The tools are representative of the industrial and agricultural workers, respectively. And, the combination of the tools illustrates the harmony of the two groups working as equals.