The Spread of Communism 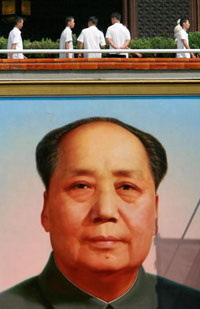 Communism wasn't contained inside the Soviet Union. As Marx's tenets had instructed, it had be to spread worldwide to achieve utopia. Some countries had adopted communism to help realize that goal, including:

It's interesting to note that the communist governments in all of these countries (except North Vietnam) collapsed right around the same time as the Soviet Union, which was a huge support to the smaller countries.

If Stalin had his way, communism would have become much more widespread, especially in the West. In the 1930s, he enacted a plan to overtake this region with furious industrial development. His hope was that Russia would become such a military powerhouse that it would stand up to the other powerful nations, especially the United States. His efforts fell short, and as we've learned, the Soviet Union slowly fell apart due to these economic disadvantages.

However, communism does have a presence in the United States today. The Communist Party USA supports political candidates in local elections. In fact, the group has even supported a presidential candidate as recently as 1984. The group advocates the end of the working class's exploitation and oppression. Ultimately, the party hopes to implement a socialist society where all people will benefit from the wealth present in the United States.

Communism also rose to power in the following nations, where it is still alive today:

In addition to the death camps Mao instituted to combat Chinese counter-revolutionaries, he also developed a plan called the Great Leap Forward, which forced collectivization of agriculture. Peasants were ushered into communes when Mao seized their property. They were forced into slave labor, and personal ties they had to their families and former lives were severed. Mao also forced mass industrialization, which, coupled with the extremes of forced agricultural collectivization, killed somewhere around 16.5 million to 40 million Chinese from 1957 to 1961. He also ordered the executions of Communist Party members during his tenure [source: University of Chicago Chronicle].

Today, China's government encourages capitalist ventures, which has resulted in a greatly improved economy. China boasts a huge manufacturing industry, churning out toys, furniture, electronics and other products. Despite these gains, the government remains extremely dictatorial in nature, exerting authority over censorship and other basic civil liberties. Human rights activists are regularly harassed, prisoners are detained without a trial and censorship abounds [source: Amnesty International].

To learn more about communism and communist nations, past and present, follow the links below.