The Fall of the Soviet Union 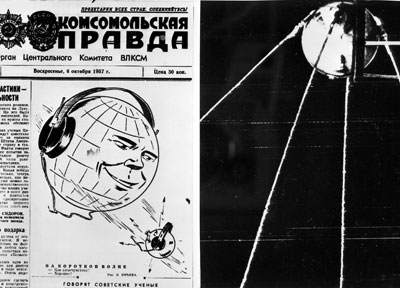 These two powerhouses disagreed over political, cultural and economic differences. The United States began developing retaliatory weapons, should the need to use them arise. These weapons were called the Strategic Triad and included long-range bombers, submarines and land-based missiles. This led to the first nuclear arms race, during which the two governments stockpiled as many nuclear weapons as they could in order to keep the other government in line. Luckily, nuclear war was avoided, in large part due to the scare tactics of the Cold War.

In the 1950s, the Soviet Union and the United States engaged in the space race. Both countries wanted to be the first in space for a myriad of reasons, particularly because their defense and military capabilities stood to benefit from a successful space program. The space race was fueled by the ever-intensifying rivalry between the United States and the Soviet Union. The Soviet Union won that contest by launching the satellite Sputnik into orbit on Oct. 4, 1957. But the U.S. was the first country to successfully land on the moon. You can learn more about the race to the moon in How Lunar Landings Work.

The tension between the United States and the Soviet Union wasn't just restricted to the nuclear arms race and space race. Many Cold War-related crises erupted over the years, including the Korean and Vietnam Wars, the Bay of Pigs Invasion and the Cuban Missile Crisis.

The Soviet Union's arms race, space race and continued support of the communist regime (all of which cost a lot of money) resulted in a stagnant economy with virtually no growth. When Mikhail Gorbachev was appointed to the presidency of the Communist Party in 1985, he became an advocate of change. Gorbachev laid his goals out: rejuvenate the long-lagging economy and accelerate economic development.

He worked with President Ronald Reagan and the United States government to come to terms with the arms and policy disagreements that had escalated over the years. Relations between the United States and the Soviet Union improved rapidly. In 1989, Gorbachev and President George H.W. Bush declared an end to the Cold War. That same year marked the fall of the Berlin Wall in Germany, signifying the end of communism in East Germany. The communist governments in Czechoslovakia, Romania and Bulgaria also fell in December 1989.

In 1990, Russia elected Boris Yeltsin to the presidency. The Soviet Union officially came to an end in 1991 and split into republics (a system of government in which an elected official leads): Armenia, Azerbaijan, Belarus, Estonia, Georgia, Kazakhstan, Kyrgystan, Latvia, Lithuania, Moldova, Russian Federation, Tajikistan, Turkmenistan, Ukraine and Uzbekistan. These republics are self-governed, rather than ruled by the Soviet Union.

When the Soviet Union dissolved, it led to a domino effect of communist nations collapsing. Learn which ones were affected -- and which ones weren't -- in the next section.

You can't discuss the Cold War without mentioning Senator Joe McCarthy, who led a "witch hunt" for communists and communist sympathizers in the U.S. To learn more about McCarthy's unethical tactics, read How McCarthyism Worked.