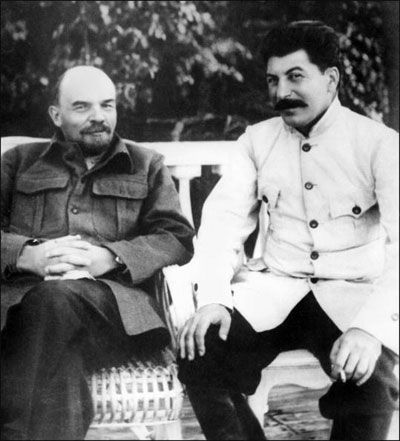 Lenin and Stalin in 1922 in Gorki, Soviet Union.
AFP/Getty Images

When Czar Nicholas was dethroned in 1917, Vladimir Lenin was in exile in Switzerland for playing a part in some previous anti-czar plots. When he heard of the uprising, Lenin cut a deal with Germany. If the Germans could transport him home, he would get Russia to back out of World War I. The Germans agreed and snuck him back in to Petrograd through a railway car.

The Communist Party was about to gather more steam. Leon Trotsky, a Russian revolutionary who had escaped from prison and fled to America, returned to Russia to serve as Lenin's right-hand man. Trotsky is largely credited for engineering the Bolshevik Revolution.

But some Russians still weren't too sure about the Bolsheviks. Lenin endeavored to gain support by broadcasting slogans such as "Bread, Land, Peace and All Power to the Soviets." To people suffering from famine, this promise hit the spot. Yet in elections for the Russian Constituent Assembly in late November 1917, only a quarter of voters cast ballots for the Bolsheviks. Lenin overturned the results and sent armed guards to prevent meetings of the democratic assembly. This made it virtually impossible for the Russian people to voice their concerns in a democratic way.

The years from 1917 to 1920 became known as "war communism" due to the methods the Bolsheviks used to push their political agenda. In 1918, the party was renamed the Russian Communist Party. Lenin and his communist cohorts endeavored to put Marx's tenets of belief into practice. This marked the beginning of the Russian Civil War, which lasted from 1918 until 1922. When the war ended, the Soviet Union formed -- also known as the U.S.S.R., the Soviet Union included Russia and 15 bordering states.

Lenin was aware that the upper class wouldn't willingly give up land or wealth, so he created the New Economic Policy (NEP) to legislate redistributing land -- taking it from the nobility and giving it to the poor. Upholding the necessary phases that Marx outlined, Lenin initiated the Red Terror, a threatening fear campaign led by the Bolsheviks. His goal was mass murder, which he accomplished through three main methods.

Next, we'll learn about Lenin's successor.