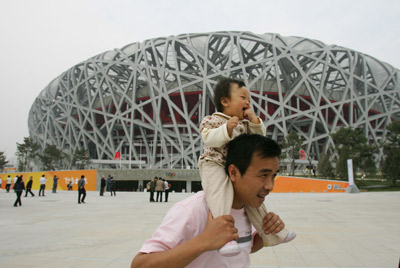 Beijing Image Gallery A man poses with his baby outside of the National Stadium or "Bird's Nest" in Beijing. China has experienced a surge in Olympic-themed baby names. See more pictures of Beijing.
China Photos/Getty Images

The honor of hosting the 2008 Olympic Games belongs to Beijing, and excitement has been spreading across China since 2001 when the city was selected. Whil­e Americans might celebrate such an occasion by collecting limited edition b­obblehead dolls or donning a favorite team jersey, the Chinese are commemorating the event with a strong show of civic pride -- including a case of baby fever.

Aug. 8, 2008, at 8:08 p.m., the time when the opening ceremony is scheduled to begin, is considered lucky, and prospective parents are hoping to bring joy and luck to their families by welcoming "Olympic babies."­ While chances are slight for most babies to be delivered at that precise time, some parents are considering other ways to bring Olympic luck to their newborns: specialized baby names.

Chinese names don't work the same as names in Western countries. The first noticeable difference is that Chinese words are represented by thousands of multistroke characters instead of an alphabet. Specific to naming, the order of the given name and surname (family name) is transposed. In the West, if your given name is John and your surname is Smith, you are known as John Smith. In China, however, your surname would come before your given name: Smith John.

While there are 4,100 Chinese surnames, only about 100 are used commonly; in 2006, the top four surnames were Li, Wang, Zhang and Liu, respectively [source: Xinhua News Agency]. In a country with more than 1 billion people, more than 60 million people share the Liu surname -- almost 6 percent of the Chinese population. A unique, individual name is hard to come by. Parents try to create baby names that are original or that reflect modern themes.­ In this tradition, thousands of parents are getting caught up in the spirit of the games. Find out more, next. 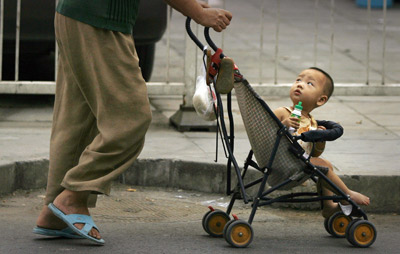