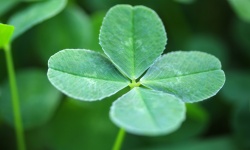 Four is one of the few even numbers considered lucky in Western culture.
AKIsPalette/iStock/Thinkstock

Some numbers are associated with superstitions only when they are viewed as an age. For example, the number 21 has an air of magic because it's the product of the lucky numbers three and seven. It's also seen as the start of a new life stage — a time when young people need all the luck they can get. By the same token, age 63 is seen by some numerologists as unlucky; if you happen to make it past this danger spot and survive to age 64, expect to live a long, lucky life [source: Murrell].

In Italy, the number 17 is as unlucky as 13 is to Americans — for very good reason. The Italians write 17 as XVII, which can be rearranged to form VIXI, which roughly translates to "I'm now dead" or "my life is over." Not a pleasant thought. Due to this negative connotation, the Italians bypass the number 17 in many of the same ways Americans skip over the number 13; they avoid using it to number airline seats, flights or the floors in buildings. Carmakers and other manufacturers avoid using the number when naming products or assigning model numbers, just in case. Ironically, the dreaded 13 is actually considered lucky in Italy, despite its reputation in many other parts of the world.

While most even numbers are naturally unlucky because they can be reduced thanks to division, superstition suggests that the number four is actually quite lucky because so many things in nature occur in groups of four — not only the cardinal directions but also the seasons and the elements that make up the Earth.

Of course, this luck only extends to Western cultures. In China, Vietnam, Korea and Japan, the number four has a decidedly unlucky air — largely because it sounds similar to the words for "death" in these languages when pronounced out loud. Throughout much of Asia, many people refuse to use the number four in prices, house numbers, phone numbers or floors on buildings due to the superstitions surrounding the figure [source: Murrell].

Lucky number seven! It's the stuff of legends for gamblers and lottery fans — and the universal symbol for slot machines and big Vegas jackpots. Wondering where the number gained its lucky reputation? It could be simply due to the fact that seven stands alone out of all the single-digit numbers; it's not divisible by anything, including five, making it powerful. It could also be attributed to the role that the number seven has played in history, culture and legend. God took seven days to create the world, the ancient world had seven planets and there are seven seas, seven wonders of the world and seven days of the week. Want some real luck? Seek out the seventh son of a seventh son; he is supposed to have magical abilities, including healing powers and an unending pool of luck.

Like the number 13, the number 666 has its very own scientific term to describe those who fear the figure: hexakosioihexekontahexaphobia. Thanks to the book of Revelation, it's viewed as the number of the beast, or the devil's number, giving it an unlucky vibe. Many will hesitate if they see this figure as a flight number, hotel room number, a price for a product or even as part of a phone number or street address. Despite its reputation in the Western world, the Chinese believe that 666 is about as lucky as it gets. In Chinese, the word for six sounds awfully similar to the word for smooth or flowing, so three sixes in a row will get the good luck flowing for sure.

Superstitions surrounding the number eight give it luck due to its association with resurrection and renewal [source: Webster]. In Christianity, God created the world in six days and rested on the seventh, leaving the eighth day open for renewal and a better world. This number is also one of just a handful where Eastern and Western superstitions align; the Chinese celebrate the number eight because it sounds like their word for prosperity. A car license plate that includes the number eight is seen as lucky, prompting buyers to pay hundreds or thousands more for the plate than one that doesn't contain an eight. Some Chinese people even change their address or phone number to include the lucky number [source: Murrell].

In a world where the majority of people don't identify themselves as particularly superstitious, it's astounding just how much impact superstitions about numbers can have on the economy. I was shocked to learn that businesses lose almost a billion dollars each time the 13th of the month just happens to fall on a Friday. While researching this article, I also learned that people in some Asian countries will pay a premium simply for a license plate or street address that contains a lucky number. Manufacturers and retailers have caught on as well, assigning random prices to products that rely more on the inclusion of lucky numbers than on any retail strategy or research.