Order of the Solar Temple 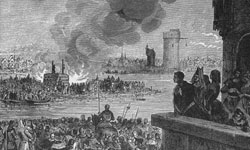 Joseph Di Mambro and Luc Jouret founded the Order of the Solar Temple in Geneva in 1984. It was one of many groups that have seen itself as a revival of the Medieval Knights Templar. Jouret claimed to be both Christ and the reincarnation of one member of the 14th century order. The leaders also prophesized that Di Mambro's daughter, Emmanuelle, would take the group's members to a planet that revolved around the star Sirius after their earthly death.

The Order of the Solar Temple was a doomsday cult. Di Mambro and Jouret believed the end of the world would come in the mid-1990s. However, the group lost several members, including Emmanuelle, after what leaders claimed was a "vision" was exposed as a hoax [source: Clarke].

Finally, in 1994, Di Mambro and Jouret believed the end was near and it was time for the transit to the new planet. In order to enter a higher spiritual plane, 53 members of the order committed suicide or were murdered in Canada and Switzerland on Oct. 4 and 5, 1994. The buildings were also set on fire after the deaths, and Di Mambro and Jouret's remains were found among the bodies. It was later revealed that Di Mambro had also recently ordered the murder of an infant he believed to be the anti-Christ. Sixteen more members of the order died in France in December 1995, and five more after that in Quebec in March 1997.