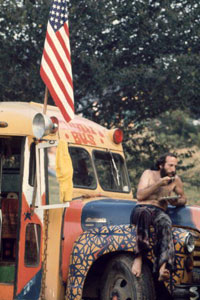 A hippie during the flower power heyday.
Getty Images

Flower power and the hippie movement at large in the United States reached its zenith on Oct. 21, 1967, with a march on the Pentagon. More than 100,000 people gathered in Washington D.C. for that peaceful Vietnam War protest, including an 18-year-old aspiring actor named George Harris. A contingent of 2,500 Army troops wielding M-14 guns surrounded the Pentagon, cordoning off the crowd from the protected building. Undeterred, the protestors stood their ground, crowding in mere inches away from the weapons. Embracing the flower power ethos of non-violence, Harris calmly inserted the stem of a carnation into a soldier's gun barrel.

Photographer Bernie Boston, working at the time for the Washington Star newspaper, captured Harris' flower power action on film [source: Montgomery]. Although the image didn't receive immediate attention, it has since come to symbolize the counterculture that rallied around non-violent Vietnam protests. That type of attention-grabbing, yet peaceful, revolt against the government and military was exactly what counterculture leaders had envisioned as the ideal way to deliver their antiwar message to mainstream America. Granted, the Youth International Party (Yippie) organizers of that October 1967 Pentagon march also tried -- and failed -- to levitate and exorcise the military complex, in an effort to rid it of the evil spirits they believed were fueling the Vietnam War. But their ultimate goal of ending the combat and sending troops home was straightforward and practical in retrospect.

After the Pentagon march, the carnation-clad George Harris hit the road and headed West to the epicenter of the flower power movement. In San Francisco, Harris joined the masses of other youth looking to follow LSD guru Timothy Leary's advice to "tune in, turn off and drop out," (or, in other words, drop out of school and drop acid instead). There, in the Haight-Ashbury district, a short stroll from Golden Gate Pak, flower power flourished to its fullest during the summer of 1967 and soon withered away. But while marijuana smoke has clouded its legacy, and psychedelic swirls and outlandish fashion obscured its essence, flower power began as an attempt to provide clarity as the 1960s societal haze brought on by the Civil Rights Movement and the Vietnam War set in.