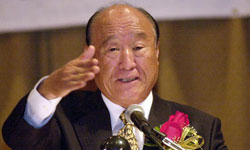 Most people have their own vague idea of what constitutes a cult. But "cult" is one of those slippery, nebulous terms that are difficult to define. Strict definitions tend to be either too wide or too narrow. To complicate matters, what one considers a cult is often a matter of opinion. But, as Supreme Court Justice Potter Stewart said about another ill-defined topic, people tend to think that they know it when they see it.

Sidestepping the controversy, sociologists don't like to use the pejorative term "cult." Instead, they like to talk about new religious movements (NRMs), which can be more widely defined. NRMs hold beliefs that are far outside of the mainstream. They are often characterized by making strict demands on the lifestyle of their members, such as giving up possessions, professions and contact with family to live in a commune with other members. Many have charismatic, authoritarian leaders whose followers believe have special prophetic powers. These leaders often prophesize about an imminent apocalypse.

We'll explore the most infamous cults that have gained notoriety either because they were so successful or because they met a bloody and horrifying end.