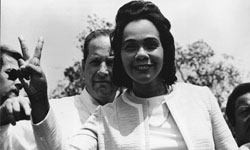 When civil rights leader Martin Luther King Jr. was assassinated in Memphis, Tenn., in 1968, the tragedy left Coretta Scott King with two overwhelming burdens. Upon her husband's death, the widow King immediately became a single mother of four children -- Yolanda, Martin, Dexter and Bernice -- and the torchbearer of her late spouse's nationwide movement for racial equality.

Compared at times to Jackie Kennedy, who was similarly widowed in 1963, King balanced a public life of travel and speaking engagements while maintaining a home life for her children. Meanwhile, she successfully lobbied the U.S. Congress to establish a federal holiday commemorating her husband's life and work, which President Ronald Reagan signed into existence in 1983 [source: Applebome]. And back in Atlanta, she founded The King Center to promote the type of non-violent social change famously espoused by Martin Luther King Jr. Since Coretta Scott King's death in 2006, her children have squabbled over control of their family's legacy and The King Center, which has attracted criticism. Still, every third Monday in January -- reserved for MLK Day -- is nevertheless a testament to this wife and mother's tireless dedication to human rights and her husband's lasting imprint on history.