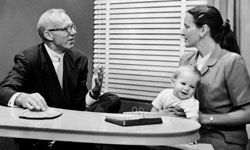 Galileo's scientific discoveries memorialized him as the father of modern astronomy. Adam Smith reaped the posthumous profits of notoriety as the father of capitalism, and Edgar Allen Poe's puzzling plotlines pinpointed him as the father of literary mystery. Similarly, as a pioneer and figurehead of his respective field, Dr. Benjamin Spock could be considered the father of modern parenting. His 1946 publication "The Common Sense Book of Baby and Child Care," has sold more than 50 million copies in more than 40 languages [source: Blue]. When the famous American pediatrician died in 1998, TIME magazine eulogized that Spock "singlehandedly changed the way parents raise their children" [source: Blue].

On the home front, however, the parenting guru who urged moms and dads to trust their instincts wasn't quite so footloose and fancy-free with his own two sons, Mike and John. In 1968, the grown boys described a rather strict upbringing under a workaholic father [source: Hammel]. For his part, Spock acknowledged his emotional shortcomings as a parent and expressed remorse at his distance during Mike and John's formative years, which he attempted to compensate for in later life [source: Blue]. Like Spock, the following 10 famous fathers might not all deserve Dad of Year awards, but each is a fascinating case study in how career success intermingles with raising a family.