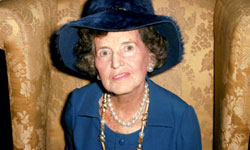 Rose Kennedy's long life was dominated by politics from start to finish. The matriarch of America's most famous political dynasty with three sons who rose to prominence in the U.S. government, she grew up while her father, John F. "Honey Fitz" Fitzgerald, served as a congressman and, later, mayor of Boston in the early 1900s. When she raised her own large family of nine children, Rose Kennedy approached her mothering duties almost like a sports team manager, keeping itemized records of everything from kids' dental visits down to their shoe sizes [source: John F. Kennedy Presidential Library and Museum]. On a 1936 calendar, Kennedy jotted down, "I looked upon child rearing as a profession" [source: Cullen]. In recognition of her devout Catholic faith and maternal attentiveness, the Vatican endowed her with the title "papal countess" in 1951 [source: John F. Kennedy Presidential Library and Museum].

Making it to 104 years of age, Kennedy outlived four of her nine children, all of whom died in tragic circumstances. Her oldest son, Joseph, was killed in action in World War II in 1944, and her daughter Kathleen died in a plane crash four years later. John and Robert were both assassinated in 1963 and 1968, respectively.