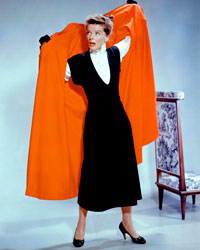 Katharine Hepburn's mother was as fiery as she was.
Moviepix/Getty Images

Though not as famous as her movie star daughter, Katharine Martha Houghton Hepburn left behind a considerable legacy when she died in 1951. Following her own mother's succinct deathbed advice to pursue an education, Hepburn earned a bachelor's degree in political science and history in 1899 and a masters in chemistry and physics in 1900 -- both from Bryn Mawr college -- which was an uncommon academic achievement for a woman at the time [source: Connecticut Women's Hall of Fame]. Less than a decade later, she became an active suffragette, picketing for women's right to vote and later championing access to birth control.

After forging a friendship with Planned Parenthood founder Margaret Sanger, Hepburn helped lobby the U.S. government to loosen its restrictions on birth control clinics and sex education by working with the National Committee on Federal Legislation for Birth Control in the 1930s [source: Margaret Sanger Papers Project]. Back then, birth control and abortion rights were even more controversial than today, but Hepburn was unfazed by the unpopularity of her pro-birth control politics and the accusations of moral depravity critics hurled at her [source: Bennetts]. At home, Hepburn and her husband educated their six children about women's rights and sexual health, and one of these kids, Katharine Hepburn -- the eventual Hollywood icon -- worked alongside Planned Parenthood later, in her adult life.