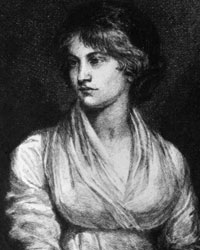 Five years before Mary Wollstonecraft published her early feminist treatise "Vindication of the Rights of Women" in 1792, she published her first book, the brief "Thoughts on the Education of Daughters: with Reflections on Female Conduct in the more important Duties of Life." Centering on a theme that would be later echoed in "Vindication...," Wollstonecraft's first publication outlined her theories on raising women as reasonable thinkers rather than just wives and mothers in the making [source: Stanford Encyclopedia of Philosophy]. During an era when marriage largely revolved around wealth and property, and women enjoyed little autonomy and few legal rights, her call for gender equity was a radical one.

Wollstonecraft didn't have a chance to educate her own two daughters, Fanny and Mary; in 1797, she died in childbirth [source: Brooklyn Museum]. She did, however, pass along her writing talent to Mary who eventually wrote the literary gem and horror classic "Frankenstein."