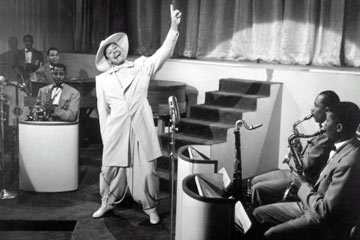 Just about every generation has had a fashion that makes a statement, both about the person wearing the clothes, as well as society. Many of the hippies who streamed into Woodstock and the Haight-Ashbury neighborhood of San Francisco during the 1960s wore bell-bottom pants and tie-dyed shirts meant to convey a message of peace. Subsequent generations of punk rockers and hip hop followers also decked themselves out in garb that sent messages, albeit ones often more combative than that intended by the hippies.

Decades before any of these fashions were interpreted to be either an attack on or protest against the status quo in American society, was the zoot suit. The rather snappy looking suit of the 1930s and 1940s transcended simple fashion and spawned controversy and debate about everything from youth and culture to patriotism and even racism.

Worn by iconic figures like Cesar Chavez, Malcolm X and Cab Calloway, zoot suits were even a central aspect in a series of riots -- known now as the Zoot Suit Riots -- in Los Angeles in the summer of 1943 [source: Peiss]. Some of the largely African-American and Hispanic young men who wore zoot suits at that time regarded them as symbols of defiance and resistance toward what they considered to be a hostile and oppressive society -- a message that some wearers of zoot suits in more recent times have also meant to convey.

Click ahead to learn more about the history of zoot suits.

Zoot suits first appeared in the mid- to late-1930s and were especially popular among young and fashionable African-American men who wanted to be noticed. "They were expensive, attention-getting and identified wearers with the posh club scene of the Harlem Renaissance," says Cynthia Clampitt, a historian who has written about zoot suits and their cultural significance for the Colonial Williamsburg Foundation's history project.

Although a number of tailors around the country claimed to be the first designers of the suit, no credible evidence points to a single individual being responsible for the look. According to Kathy Peiss, a professor of American history at the University of Pennsylvania and author of "Zoot Suit: The Enigmatic Career of an Extreme Style," zoot suits were an exaggerated version of what was known as a drape suit -- zoot suits were called "extreme drapes," in fact, and were advertised as such in African-American newspapers at the time.

Made initially out of wool -- and later rayon, as rationing for World War II kicked in -- zoot suits had a number of defining characteristics. Suit pants were worn high on the waist and very tight; below the waist, the pants billowed like parachutes around the thighs and knees before being tied tight at the ankles. Zoot suit jackets also had exaggerated contours, with wide shoulders and sleeves that reached the wearer's fingertips [source: Unger]. Many zoot suiters also donned hats adorned with feathers, wore pointy shoes and sported key chains that dropped all the way to the knees to complete the look.

Peiss says that zoot suits also became associated with swing dance and jitterbugging, two of the more popular dances of the time, because the style of the clothing complemented and accentuated the dance movements. "The fabric swung as the dancers did," she says.

The name zoot suit, of course, is also appropriately quizzical for a fashion that was so unconventional. Some contend that the word zoot has no meaning whatsoever, and is only part of a rhyming jive type of speech common amongst African Americans of the era. However, jazz musician Cab Calloway wrote a jive dictionary in which he described the word as meaning "exaggerated," a term that could be applied to both music and fashion [source: Peiss].

Read on to learn about the zoot suit's evolution from style to statement.

The Public's Perception of Zoot Suiters 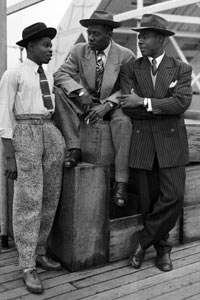 As is the case with most types of fashion that come to mean something more to people and society in general, zoot suits were really just articles of clothing at first -- the object of attention, no doubt, but in no way political. America's involvement in World War II began to change that, however. The war effort required rationing of all sorts of goods, including textiles, and because the construction of zoot suits needed a lot of cloth, those who wore them were considered by some to be unpatriotic.

There was also a racial element to how so-called zoot suiters were perceived by white, middle class Americans. "Because the style was especially popular with African Americans and Mexican Americans, some authorities and newspapers, especially in Los Angeles, linked [the zoot suit] to gangs and criminal activity," Peiss says. "None of these observations were necessarily true, but they stuck." Nevertheless, this perception was routinely emphasized in newspaper coverage of the day, as crimes were regularly blamed on the zoot suiters in the headlines.

Peiss contends that these attacks against the zoot suiters are what likely turned the suits into symbols of defiance and resistance. For certain segments of the largely minority zoot suiters, then, wearing their flamboyant outfits became a way to protest the often unjust manner in which they were treated, as well as a way to assert their independence. In other words, the very fact that zoot suits and those wearing them were targeted by authorities helped transform the clothing into a potent symbol.

Read on to find out how these overlapping tensions blew up in L.A.

The Zoot Suit Riots and Beyond 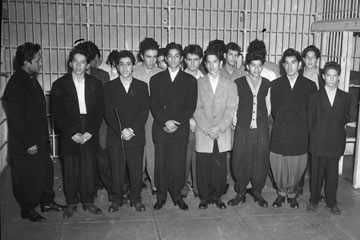 There were a number of incendiary ingredients bubbling in Los Angeles during the summer of 1943. For one, Southern California was a center of military activity, a place where thousands of servicemen were stationed before shipping out to the Pacific Theater [source: PBS].

At the same time, newspapers in L.A. routinely depicted young, zoot suit wearing Mexican Americans, not only as being unpatriotic for wearing their outfits, but also as lowlife street thugs.

"The record already reveals killings, stabbings and cases of innocent women having been molested by zoot suit gangsters," read an editorial in the Los Angeles Examiner titled, "Police Must Clean Up L.A. Hoodlumism." Some historians believe latent and overt racism led to this type of criticism in the press.

What eventually became known as the Zoot Suit Riots began in L.A. gradually throughout the spring of 1943, with clashes occurring almost everyday between servicemen and Mexican American youth. On May 31, about a dozen sailors and soldiers fought with a group of young Mexican American men, a conflict that left one sailor badly injured [source: PBS]. This initial scuffle quickly escalated, fueled at least in part by sensationalistic press coverage.

Over the next week or so, a series of fights between servicemen and zoot suiters occurred around the city, with taxicabs full of sailors seeking revenge arriving in minority areas of L.A. On June 7, 1943, thousands of servicemen and others descended on downtown L.A. and beat up and stripped many young Mexican Americans, some who were wearing zoot suits and some who weren't [source: PBS]. The riots also spread to Watts, the largely African-American enclave of the city before the military forbade servicemen from entering L.A. and the city council passed a resolution banning people from wearing zoot suits.

In subsequent decades -- especially during the height of the black liberation and Chicano pride movements -- those seeking to express resistance and independence have adopted the zoot suit. Even overseas, the zoot suit has been utilized as a form of dissent. In the Soviet Union and Poland, young men wore zoot suits to protest communism, though Peiss from the University of Pennsylvania says it was more a way to tweak authorities than real subversion. "It's important not to see them as full-fledged political dissenters for the most part," she says. "But these young men adopted American styles as a subtle statement of opposition."