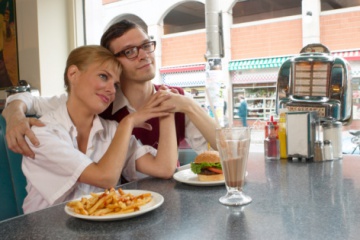 To some, thinking about life in the 1950s harkens back to a golden age of wives in heels and pearls. To others, it symbolizes the rise of suburbia and the infiltration of TV into the living rooms of those far-sprawling abodes. To still more, the decade smacks of the Cold War and rising tension in race relations. But for many, nothing characterizes the '50s more than the sound of rock-and-roll, the swirl of skirts, the crinkle of lettermen's jackets and the soft scuffle of socked feet across a wooden gym floor.

For the 1950s was the height of the sock hop -- a pop culture phenomenon similar to the informal high school dances of today. The hops got their name because of the requirement that the frolicking teens remove their shoes so they didn't scuff up the wooden floors of the school gyms that hosted the mixers.

Not everyone thought sock hops were great fun, however. Despite the fact that schools condoned such activities, many parents were horrified by the idea since sexual taboos appeared to be shattering right and left: The music and the dances made popular at sock hops were considered far too sexualized by the older, more conservative set. Many of the most popular songs were also the work of black musicians, and racial tensions were starting to simmer to the surface during the 1950s and in the years to follow.

The new music and dances were coupled with an ongoing cultural phenomenon -- in part fueled by movies and other entertainment medium -- that deemed fun-seeking youths as dangerous. But if you were lucky enough to be allowed out of the house, what was it like to attend a sock hop? Find out about the sights and sounds on the next page.

The Music and the Fashions of the Sock Hop

In the 1950s, a variety of groundbreaking fashions burst onto the scene, and their popularity swept the nation. When teens planned to attend a sock hop, the girls would often suit up in sweaters and swirling circle skirts. The best remembered style today was the felt poodle skirt, first designed by Juli Lynne Charlot in 1947 [source: Bramlett]. Guys, meanwhile, would commonly sport jeans and T-shirts. Of course, subtle tweaks in the model could create a whole separate look, and teens could fall into social roles ranging from preppies to greasers.

Music was the other major defining characteristic of a sock hop. Rock-and-roll had recently surged into the mainstream -- the first use of the term in its modern context had allegedly been in Cleveland in 1951 by disc jockey Alan Freed -- and many teens quickly became obsessed fans of the new sounds. With the upsurge in television ownership and shows like "American Bandstand," teens took to rock-and-roll music en masse.

At sock hops, teens might dance -- and even dally with -- a date, or simply dance in a group. That was the beauty of the informal setting. But sock hops were more than just simple school dances. They signified a changing tide in the culture of teens. More about that on the next page.

Like "American Idol" today, "American Bandstand" was wildly popular among TV viewers in the 1950s, '60s and beyond. The show went nationwide in August 1957, and within 6 months, it was broadcast on more than 100 stations with 20 million people regularly tuning in [source: Doyle]. "American Bandstand" helped increase adult acceptance of rock-and-roll music -- seeing the chaperoned dancing teens on daytime TV helped diminish the stigma attached to sock hops in many parents' minds. Dick Clark, the show's host, even put in live appearances at additional sock hops, sometimes attending more than two dozen a week.

The Culture and Coolness of the Sock Hop 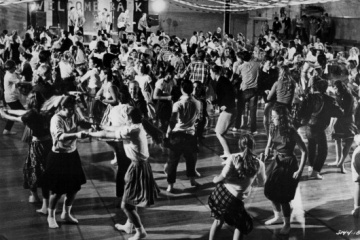 A scene from the set of the movie American Graffiti.
Michael Ochs Archives/Universal Pictures/Getty Images

Historically, the teenage years didn't exist, at least not to the extent that they required an appellation all their own. That started to change, though, when psychologists began recognizing adolescence as a concrete life stage near the start of the 20th century. From then on, society treated teens as a group psychologically distinct from children and adults. The characteristics we often associate with today's teens, however, like rebelliousness, obliviousness and gravitation toward cliques, didn't really go mainstream until around the time of the sock hoppers [source: Marantz Henig, Platt].

As a demographic, young people's priorities, perceptions and practices typically tilt wildly from generation to generation. To read about 1950s America is to witness this giant generational muddle in an extreme, with the older folks often baffled and horrified by the ways of the youth (despite their own Jazz Age teenage years), while at the same time helping to trigger the transition.

Some historians believe the modern teenage mindset was born out of attitudes prevalent following the Great Depression and World War II, as 20th century consumerism and the search for the American Dream took shape. Determined to wring the most out of life, and often spoiled or neglected by parents who had lived through such hardships and were now working hard and prospering, the fun-loving teens of the '50s (and to some extent, the '40s) burst onto the scene with a vengeance.

And while the aftereffects of the Great Depression and World War II undoubtedly affected the generation coming of age following those social upheavals, one can't underestimate the importance of TV for defining trends. In 1950, there were approximately 6 million televisions in the United States; by 1960, that number had soared to more than 50 million -- almost 9 out of 10 households had one [source: Tamazashvili]. The teens of the 1950s those that followed were sucked in by the visual power and connectivity of televisions, which helped fuel conformity and fads.

Beyond simply listening and dancing to rock-and-roll -- as teens could at sock hops -- they now saw these musicians performing live on television, and a wild new incarnation of fandom was forged. They were confronted by a barrage of media meant to appeal to them from an advertising perspective to fish out money forked over by indulgent parents, which ramped up teens' desire to connect with and mimic these real and fictional teenage standards. Automobile sales took off, too, and many teens were given the freedom of the open road -- which also meant the freedom of unchaperoned "parking" at the end of especially good dates. Even the practice of dating in and of itself drastically evolved from past conventions.

It was heady stuff, and all of these factors fueled a culture of teens who could hit the gym floor in socked feet and dance their hearts out, swirling and hopping the night away.