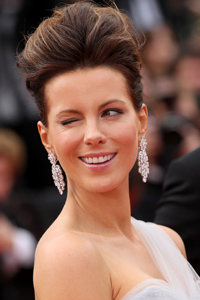 There's an old saying that goes, "The higher the hair, the closer to God." If this saying has any truth to it at all, then women who wear beehive hairdos must be among the holiest women on earth. Indeed, this hairstyle seems like it would need a bit of divine intervention -- how else could a woman get her hair to stand inches taller than her scalp?

As it turns out, all you need is a comb and a lot of hairspray to achieve this stylish do, which was named for its resemblance to the long cylinders in which honeybees go about their business. The hairstyle is alternately known as a B-52, because it also resembles the nose of a B-52 bomber. It's not often that women draw fashion inspiration from a bee's residence or a military plane, but icons as diverse as Audrey Hepburn, Amy Winehouse and Marge Simpson have modeled this tall hairdo. The B-52's, a band known for hits such as "Love Shack" and "Rock Lobster," named itself for the beehives worn by the two females members. On the television show "Mad Men," the character of Joan wears a beehive in a nod to historical accuracy, and though the beehive is often a symbol of retro kitsch today, many women have modernized the style for red carpet events, weddings and proms.

The beehive celebrated its 50th anniversary in 2010. On the next page, we'll recount the history of this famed hairdo -- just don't sit behind a woman with a beehive while you try to read it.