What's the most polite country in the world? 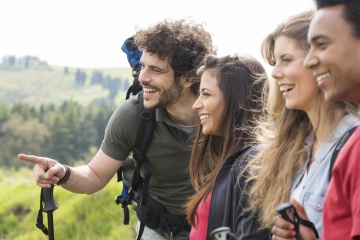 New Zealand tops the list of most polite countries — maybe it’s hard to be rude when you're surrounded by beautiful landscapes.
Ridofranz/iStock/Thinkstock

First let's clear up some vagueness. Does the most polite mean the kindest? Does it imply the most hospitable? Or does politeness refer to a country's bewilderingly complicated system of etiquette and manners that folks — who either live there or are visiting — have to figure out how to follow?

Bad news on all fronts. Turns out, every one of those criteria would be entirely subjective. While I might find it unfailingly impolite to see locals, say, spitting on the sidewalk as I pass by them, it's not given a second thought in other cultures. And while it's natural for me to assume that someone smiling and making eye contact as soon as I enter a store is delighted I'm there, I can't assume that shopkeepers who mind their own business are considered rude around the globe. But hey, it's way too easy to just say there's no such thing as a polite country and shrug it off. What's the fun in that? It's much more enjoyable to rank countries in order — subjective or not — and then proclaim a winner in the Polite Country Competition.

Lucky for us, there are actually quite a few resources that rank nations by politeness, based on different criteria and survey results. While there's no overall winner that comes out on top every time, we can at least get an idea of what constitutes "polite" in different contexts. For instance, let's take the HSBC Expat Survey, which asks expatriates to measure their quality of life and economics in their new countries [source: HSBC]. When we focus on what the survey found about what might be "polite" qualities — such as how easy it is to make friends in a country, feel welcome at work and adjust to the new culture overall — New Zealand, Ireland and Australia are in the top three (respectively).

The World Economic Forum's 2013 survey of tourist-friendly spots, however, would have you believe that Iceland is actually the most friendly place to visit [source: WEF]. New Zealand cropped up again in second place, and Morocco came in third. Now, sure, it's not exactly a measurement of politeness, but the attitude of residents toward visitors isn't anything to dismiss, either. Nor is the reputation of the country in general — Canada topped the "best reputation" list on the Reputation Institute's 2013 RepTrak report [source: Reputation Institute "Canada"].

We should be clear that the reputation ranking isn't tied explicitly to manners or behavior; it takes into account countries' economic and political reputations as well. Still, we're too polite to withhold credit where it's due.