How to Tell Someone They Talk Too Much 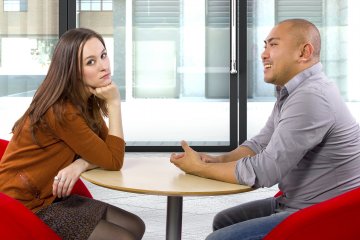 What should you do when you wind up on the recieving end of a never-ending monologue?
innovatedcaptures/ThinkStock

You start by nodding and saying, "Uh-huh." Then you check your watch. You survey the room, searching for escape, but there's no hope. Your eyes glaze over. "Uh-huh." Being trapped by an incessant talker isn't an unusual problem, and if you find it happening to you pretty regularly, you can help! It's going to take courage, honesty and kindness on your part, but all those who have been cornered by one-way conversationalists will salute you.

Whenever anyone commits a breach of etiquette, it's awkward to intervene. People don't want to hear they've been thoughtless, rude or boring. But if you take the plunge, talkers benefit as much as listeners. Prattlers aren't appreciated, so reining in the habit increases their social acceptability. While some unrelenting orators honestly believe they're enthralling and don't notice signs to the contrary, others are nervous, lonely or hungry for validation [source: Newman]. They react by rambling because silence can be scary. In certain cases, people with medical conditions such as attention deficit disorder (ADD) have difficulty controlling their impulse to talk [source: Kroplick]. No matter the reason, listeners often become frustrated and resentful when captured by someone who talks too much.

Stepping in when the talker in question is a stranger isn't a good idea. Without an ongoing relationship, it's really impolite to offer up this kind of unsolicited criticism. You're not a hostage; you can always just excuse yourself and walk away. However, if you have an acquaintance, friend or coworker who would benefit from this information, have the intervention in private. Though you might feel better having some backup, your target will feel ganged up on. Need more convincing? Without an audience to entertain, the talker might become a listener and you improve your chances of being heard and understood.

Begin by checking in. Seek permission to offer feedback with a line like, "May I tell you about something I've noticed?" Once the talker gives consent, make a clear statement about the behavior you've seen and offer a focused observation. Don't just throw out a blanket, "You talk too much." Be specific. For example, "During our recent book club discussion, you didn't allow me to give my point of view. When I tried, you talked over me," or, "We spent most of the meeting today hearing your point of view. Three people were trying to raise their concerns as well, but they didn't get a chance to do it." Keep control of the conversation and don't allow this to become a discussion; you're providing feedback. Avoid complaints, insults or sweeping generalizations. Comments like, "People hate it when you talk too much" or, "You never let anyone else speak" can trigger anger or defensiveness. That won't lead to the behavioral changes you want.

Of course, if you're someone's boss, the situation is a little different. A good example is to set the stage by beginning with the situation where the problem occurred: "I'd like to talk to you about the group discussion we had in our meeting today." Then, note the specific behavior that caused a problem: "When Mark tried to speak, you continued to talk over him for several minutes." Finally, describe how this behavior had a real impact on work: "Mark had important updates about the software we're using, which he needed to share — but because we ran out of time, he didn't get to."

Then, you can recommend a course of action. What do you want to happen as a result of the intervention? Never to hear another word from the talker? That's not going to happen – and that's not what you want. Be explicit and you're more likely to succeed. Try, "During a meeting, please don't talk for more than one minute at a time" or, "During a discussion, after you make a point, please let other people respond." Now the talker knows your limits and has something to aim for. Talking too much is a habit, so you may have to go through the process more than once. Be patient and resolute and you'll be rewarded – with silence.