Is it rude to point out someone else's rudeness? 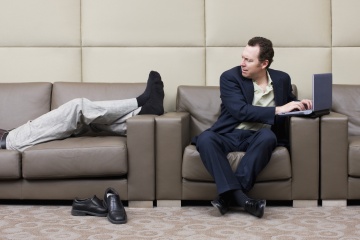 We think he might have a good (and smelly) reason to ask this guy to straighten up.
© PictureNet/Corbis

Manners, etiquette and simple social courtesy aren't all necessarily the same thing. You might think of manners as saying "please" when asked if you want a salad and "thank you" when it's handed to you. Etiquette dictates that you use the salad fork that's set out on the table when you eat the salad. Social courtesy is the part where you don't bring up your host's acrimonious divorce as you pick your way through the kale with balsamic vinaigrette. Should you "break" any of these cultural rules, you might be subject to a sharp look, pointed words or even an invitation to leave the house. But when — if ever — is it actually OK to point out when someone has crossed the line?

We must remember that the line is imaginary. Did you disagree with any of the categorizations in the first paragraph? That would make sense, because manners, etiquette and courteous behavior are all entirely subjective. There are obvious cultural differences. For example, it's perfectly acceptable in China to spit in public, while I might receive a look of disgust if I cheerfully spit in someone's path in the United States [source: Tatlow]. But it's also based on individual beliefs, too. I've never cared if someone whistles in a crowded subway car, but others might find the behavior an inexcusable racket.

So before we talk about what we can and can't sternly reprimand people for doing, we better acknowledge that claiming "authority" on the subject of manners is a slippery business. Unless you're Miss Manners, you better expect disagreement. If you are Miss Manners? Well, we'll get to that later.

Let's start small. Suppose someone didn't say "thank you" when handed that salad. If the salad-taker is an adult, it seems safe to assume the salad-giver won't prompt manners in a sing-songy way ("Whaaat do you say?"). It's a person's prerogative whether to say "thank you." Let it go. (And it's probably not appropriate to correct another person's children, either. Not your problem if they grow up rude.)

Now, when it comes to questions of etiquette like using the correct fork, the main thing we want to avoid is embarrassment. It's not rude to accidentally pick up the dessert fork for salad. It's just ignorance or a mistake. (Or maybe you just don't care. That's perfectly reasonable.) As Miss Manners says, it's never polite to point out when someone makes an accidental faux pas. A gracious person would probably just try to correct it by making sure a new dessert fork is in place before the cake comes out [source: Martin].

But here's the big one. When someone is being what we consider socially inappropriate, can we point it out? The answer is yes, but we must acknowledge that rude shouldn't beget rude. Changing the subject, gracefully leaving a conversation or simply tactfully asking the person to lay off the behavior can be acceptable. Aggressive, mean-spirited demands aren't polite.