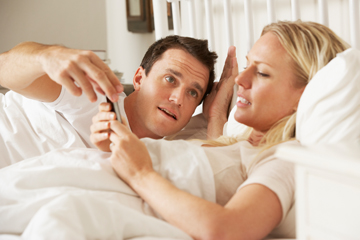 Social media, smartphones and the online world add layers of complexity to the world of politesse.
Mark Bowden/Getty Images

As we look back across history, we see that the rules of etiquette changed all the time. We no longer think it's OK for men to drag women around by the hair while waving a club in the air -- an admittedly extreme and cartoony example, but one that gets the point across. In general, men don't wear ties to work every day anymore, and women don't have to wear dresses and pantyhose -- either to work or to do housework --with an apron, pearls and heels, like the June Cleavers of yore. So with that said, it's no surprise that something as ubiquitous as the Internet has changed the rules of etiquette; the surprising thing would be if it hadn't.

Think for a minute about what etiquette really means: customary behavior among a specific group of people. For example, sticking to etiquette in one country -- a place where people eat most often without utensils, for instance -- may be seen as rude behavior by people who live in a country where the custom is to eat with forks. These rules not only make a particular society run more smoothly, but they also make communication among group members easier. And as the rules change, there will be early adopters and later adopters.

For instance, let's say someone introduces a food -- such as ice cream -- that can't easily be eaten with just fingers. This new food is then accompanied by a tool like a spoon to help people eat it. Kids with a sweet tooth might be on board right away, while those who may not like ice cream or who don't want to use a spoon might resist at first. Eventually, however, many of the early resistors will come around when they realize that if they want to spend time with their children, they had better get comfortable with ice cream and spoons.

The same is true with the Internet. In many ways, it's the province of the young, with millennials and their younger siblings writing the rules of behavior and parents and grandparents scrambling to catch up so they can communicate with their offspring. In business, it's often the other way around. In most instances, older generations are still in charge in either client or coworker relationships. This means that Internet etiquette -- as with in-person etiquette -- can be very different for personal and business interactions. Here are some of the ways standard behaviors have evolved because of the Internet.

Thank-you notes: When my sister and I were kids, our mom would sit us down after Christmas or birthdays and oversee the writing of the dreaded thank-you notes. It didn't matter whether the gift was undies or the best doll ever: Thank-you notes went out promptly to everyone who gave us a gift. Can e-mail -- or even a text -- take the place of the thank-you note? In many instances, the answer is yes.

That said, there are still some considerations. If you're thanking grandparents, a real snail-mailed note may still be the best option. For other people, an e-mail or text may be appropriate. Think about the recipient -- a good lens to use when considering all behavior. How would that person like to receive a thank-you? Is one even necessary? If the person is a good friend, a text or e-mail is probably fine -- and completely acceptable within the new rules of etiquette. If it's someone who doesn't live in the virtual world, then a "genuine" thank-you note -- handwritten, addressed and stamped -- is the polite way to go.

RSVPs: E-vites and other online invitations have made it easier than ever to RSVP, but people often don't do so in a timely manner, which leaves the host at a loss as to how much food to plan for or how large a space is needed. Take the easy -- and polite -- way out. As soon as an invitation comes in -- no matter what form it takes (even a snail-mailed wedding invitation, for example) -- check your online calendar, add the event to it and respond right away and in the manner requested in the invitation (text, e-mail, smoke signals or whatever). If your plans change, let the host know immediately. Listen to the voice of the parent or grandparent you may sometimes hear in your ear: A prompt RSVP is still polite, even if the form of invitation has changed.

Emerging Internetiquette: While thank-you and RSVP rules have evolved with the Internet, some rules have only emerged since the advent of the virtual world. Rules around texts, emails, social media and 24/7 telephone availability have all popped up more or less within the last decade, as increasing numbers of users have gravitated to online living. Here are some things to keep in mind as you maintain your virtual connections.

One of the ways the Internet hasn't changed etiquette is though there's dispute about what "polite" looks like, being polite still matters. In some ways, it matters even more. It's easy when you don't see someone's reaction -- such as facial, tonal or other cues -- to forget that what you text, e-mail or post on Facebook has the power to hurt. It's why the word "cyberbullying" came into being. Don't be a cyber -- or any other kind of -- bully, stalker or ONLINE YELLER. Be polite in all communications -- face-to-face as well as virtual.

Smartphones at home: Now that smartphones -- and the technology they hold -- are everywhere, what about behaviors associated with these newer gadgets? This is one of those generational areas. If you have teens, they may protest that all their friends text at the table or check SnapChat in the middle of a conversation. And just as that claim didn't work on your parents, don't let it work on you.

There are places where and occasions when phones need to be put away. For instance, it's rude to text or update your Facebook status in the middle of a face-to-face conversation of any kind. If you're expecting an important call or text, let your companion know and wait for the notification. Don't keep checking as if what's happening -- or not happening -- on your phone is more important than the person in front of you.

Keep phones off the table at meals. Studies show that children in families that eat together are healthier, happier, do better in school and are better socialized. Keeping phones away during meals can be part of this as well. Again, it is just good manners [source: Rutgers].

Teaching teens and their younger siblings Internet etiquette now can go a long way toward making their professional lives easier later on when etiquette can impact careers. In many ways, personal and business etiquette are the same. The bottom line is being polite. But some things have evolved a bit differently in the workplace -- and the consequences of making these mistakes can cost you a job.

Internetiquette in the workplace: First up, don't use your phone -- whether to text, e-mail or take a call -- in a meeting with a client or potential client. Not only is it rude -- just as it's rude to do in front of friends -- but it can also determine whether you retain a client's business or lose it. Your clients and prospects are paying for your expertise, time and attention: Make sure they have all three.

Reread all emails or texts before hitting send. Be sure the tone is professional and polite. Only send messages to people who really need them -- and don't copy everyone in the building. Use a succinct and meaningful subject line, don't make people dig around for the correct -mail later, and don't say anything in an email that you wouldn't say in person. An email can spread faster than kudzu. Think before you hit send.

Be present: Finally, in personal and business communications, sometimes the most polite thing to do -- and something that's good for both our health and well-being, according to psychologists -- is to have a face-to-face conversation. Don't forget how to talk, laugh, cry and be with other people. Our need for interpersonal connection unmediated by technology is one thing that hasn't evolved with the Internet [source: Frederickson].