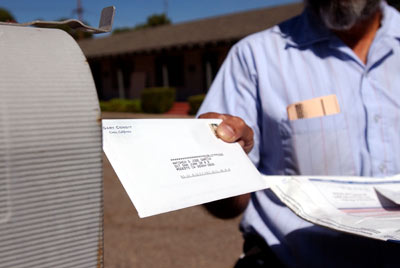 A postal carrier delivers letters in Modesto, Calif. In 2012, those letters (and packages) stacked up for a total mail volume of 160 billion pieces. Let's hope that at least a few of them brought good tidings.
Justin Sullivan/Getty Images

We all know where the United States Postal Service seems to be heading — down, down, down. Plunging volume and layoffs have been the norm. Going by the numbers, the years between 2010 and 2015 were mediocre [source: USPS]:

So it's no wonder that the USPS is desperate to figure out a sustainable solution to continue operation. As email, fax machines, commercial package delivery companies and even 3-D printers edge out the need for a hearty postal service, the USPS has tried marketing campaigns, selling merchandise and trademark rights. (Basically, they're doing all the things your college band attempted in order to hit it big.)

The USPS, of course, exists as an independent establishment of the executive branch of the U.S. government. No tax dollars flow its way. Rather, it operates as a business. A board of governors made up of the postmaster general, the deputy postmaster general and nine governors who are appointed by the president (with the advice and consent of the Senate) lead the organization. It competes for business in the communications, distribution, delivery, advertising and retail markets.

So let's dive in. Come rain or shine, we will find out how the United States Postal Service works.