The History and Popularity of Ugg Boots 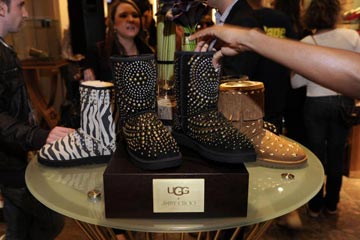 A huge leap from their humble roots, UGG-brand boots are sold in glitzy botiques like this SoHo store. These studded UGGs were a 2010 collaboration with designer Jimmy Choo.
Eugene Gologursky/Stringer/Getty Images for UGG

No matter how you spell it -- ugh, ug or ugg -- recorded accounts of sheepskin boots have been around since the late 1800s, when Australian shepherds used leather straps to lash sheepskin around their feet and ankles.

By the 1930s, several manufacturers were selling sheepskin boots in small batches. Australian World War I pilots laced them up to ward off frostbite during unpressurized flights that reached altitudes of up to 40,000 feet (12.19 kilometers). (This would be like rolling your car window down and driving at 200 miles per hour in temperatures of 60 degrees below zero in Fahrenheit -- or 322 kilometers per hour at 51 degrees below zero in Celsius.) The pilots may have coined the term we know these boots by, calling them "flying uggs," short for "ugly" [source: Conley]. However, if you're looking for someone to thank (or blame) for uggs' current place in the fashion world, turn to surfers.

In the 1970s, surfers who rode the cold waves of Australia's Byron Bay frequently slipped into sheepskin boots once they were beachside. One of those surfers, Shane Stedman, quietly trademarked "ugh-boot" and, later, "ugh," and then sold the rights to fellow surfer Brian Smith, who began selling the boots in Southern California. Ugg boots caught on with the local surfing community and spread to neighboring coastal areas [source: UGG Australia].

And that's when Doug Otto stepped in. Otto, the founder of California-based Deckers Outdoor Corp., had already developed a niche in the footwear market. His company's most successful product, the Teva all-terrain sandal, had met with early success; however, sales leveled as big-name competitors like Nike and Reebok introduced similar offerings. Otto saw potential in Smith's simple sheepskin boot with a cultlike following. And, although sheepskin and fleece were thought to be prohibitively expensive by some industry insiders, Otto believed manufacturing the boot would pay off, especially during sandal-sales slumps in the winter months. By 1995, Deckers had purchased the ugg boot design -- trademarks and all -- from Smith for more than $12 million [source: All Business, Conley].

Although Otto surely believed the company's foray into winterwear would be a good one, few could have predicted the lowly sheepskin boots' success. Within a few short years, UGG Australia, as the Deckers' division was called, would outsell its Teva line hands down. In fact, UGG Australia would become the driving force behind the American company's renaissance, transforming it into a global powerhouse -- and its leading product into a pricey status symbol.