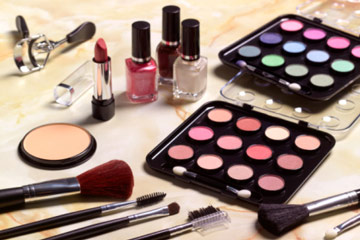 Image Gallery: Makeup Tips Could you live without makeup for a week? A month? A day? See more pictures of makeup tips.
Peter Dazeley/Photographer's Choice/Getty Images

In 2010, blogger Rachel Rabbit White challenged her readers to join her in a week without makeup. That meant no foundation or mascara before an important work meeting, and no lipstick before a big date. White acknowledged on her blog that the thought of a week without makeup scared her, yet it was that response to the idea that let her know that she was on the right track. Makeup had become something she had to put on to leave the house, and White wanted to understand how cosmetics had taken up such a permanent role in her life. She wanted, she wrote, to have a better relationship with cosmetics by coming to terms with why she felt she needed them.

Throughout the week, White posted pictures of women sans makeup on her blog. She also explored issues like the alleged toxicity of makeup, whether men like makeup on women and when she first started using makeup. While White blogged, her readers weighed in on the experiment. Some bloggers and blog commenters said they'd never go a day without makeup, and then they grappled with whether that made them vain or whether it meant they felt empowered or artistic in their use of makeup. Other women wrote about how they never touched makeup, and such a week would be easy -- they'd already found inner beauty or just made peace with what they saw in the mirror. Men weighed in with their opinions on makeup, both on women and on themselves.

White's experiment touched a nerve and inspired such a barrage of Internet activity because everyone has some experience with makeup, be it the decision not to wear it, the daily application of it or a partner's adoration of it. The worldwide cosmetics industry rakes in $40 billion each year, but there are some people who question what the industry sells and whether it delivers on that promise [source: Nixon]. Why do people wear makeup? Does it help someone's self-esteem to apply a product or are we all chasing unattainable ideals of beauty? Is wearing makeup good for our skin? In this article, we'll explore people's relationships with cosmetics, though unlike White's experiment, we won't ask you to take your makeup off. Whether you wear cosmetics daily or never touch the stuff, we promise you an interesting ride through the history, chemistry and psychology of makeup.