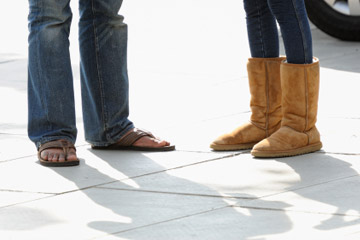 Uggs are commonly worn with leggings or jeans tucked into them (and usually during cold winter months), but they can also be worn with shorts, skirts and casual dresses, especially on the beach.
©iStockphoto.com/Nasowas

A-list celebrities stroll out of coffee shops wearing them. Toddlers slip them on before preschool or play dates. Teenagers personalize them with ink drawings. Men and women wear them everywhere, from ski resorts to carpool lanes. Ugg boots -- like it or not -- have become a fixture in footwear culture.

Sheepskin boots, known by the generic term ugg or the brand name UGG, feature an upper consisting of a suede exterior lined with soft, temperate fleece and, modernly, a rubber sole. This functional footwear was first worn in Australia and remains a deeply entrenched symbol of its national culture. By the 1970s, however, this boot -- originally bulky, mid-calf length and the color of weak, milky tea -- began a migration to other shores, including the United States.

During the 1990s, UGG Australia boots began to receive brand name recognition in the United States when they began seeding the boots with fashion editors and celebrities (and made right-wing radio host Rush Limbaugh the company's unlikely spokesperson). In 2000, UGG Australia sales rose after Oprah Winfrey bought 350 pairs for her staff -- and introduced the boots to millions of viewers as one of her Favorite Things. And actress and PETA activist Pamela Anderson helped make UGG boots a hot item -- at least, until she realized they were made of sheepskin, not just fleece sheared from sheep [sources: Graff; Sentenac].

Today, uggs and ugg-inspired boots are sold around the world and come in many colors and lengths. Some models are outfitted with long, wavy fleece trim -- the trademark of Mongolian sheep -- while others feature sneaker- or clog-style style variations.

The ugg's rise from utilitarian foot warmer to fashion icon may have been a relatively fast one, but it's also been riddled with controversy. Namely, trademark disputes, marketing missteps, devotee backlashes and a slew of less expensive, faux-leather competitors and knockoffs.

So how do surfers fit in the mix? 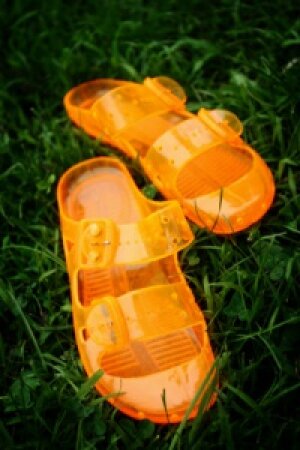 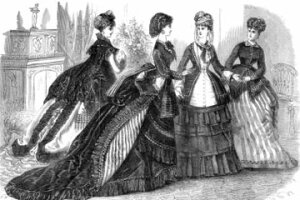