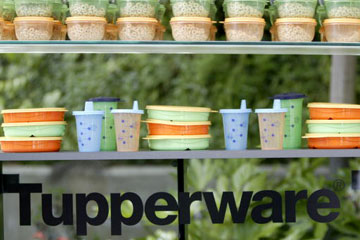 On June 2, 1947, Earl Tupper filed a patent for the "E.S. Tupper Open Mouth Container and Nonsnap type of Closure Therefor" [source: Kealing]. An inventor since adolescence, Tupper already held a number of filings with the U.S. Patent Office, but this one would prove to be his golden ticket to greatness in business and mid-century American culture. The airtight sealing bowl described in that patent, originally branded as the "Wonderlier Bowl," would become the cornerstone product of the beloved Tupperware line of plastic kitchenware.

First, though, Tupper had to get his hands on some plastic. During World War II, polyethylene and other higher quality plastics had been diverted to military manufacturing. After the fighting ended and troops returned stateside, Tupper envisioned a revolutionary role for the light, flexible product. While running his own plastics manufacturing company in 1945, Tupper obtained some polyethylene plastic from Dupont, his former employer, and was determined to find a novel use for it [source: PBS]. Resistant to corrosion, leaks and breakage, polyethylene struck him as an ideal food storage material. After two years of testing dozens of temperatures and pressures to soften and reform the oil-based plastic, the chemist discovered the prime combination for injection molding polyethylene into bowls, lids, tumblers, plates and other kitchenware shapes.

Around the same time that Tupper was obsessively tinkering with polyethylene, a direct sales company called Stanley Home Products was perfecting its product demonstration tactics. Bigwigs at Stanley noticed that salesman Norman W. Squires had reaped record profits by gathering groups of potential shoppers together in casual, party-like settings to show off the merchandise [source: PBS]. Rather than going door-to-door like everyone else, Squires began hosting home product parties and developed the strategy for the companywide "Hostess Group Demonstration Plan" [source: PBS].

Little did Tupper know that Squires' ingenious group demonstration method would eventually save his beloved Wonderlier Bowls and other polyethylene products from stagnant in-store sales and spawn one of the most iconic rituals in 1950s suburban America -- the Tupperware Party.