The History of Tupperware 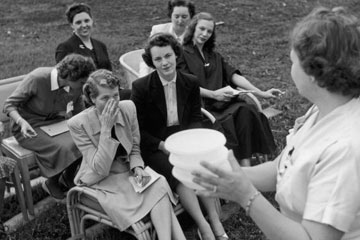 In 1947, when Earl Tupper designed his first line of polyethylene kitchenware, which he dubbed Tupperware, TIME magazine raved about the plastic that could "withstand almost anything," and House Beautiful marveled at the simplistic, yet chic, design [source: Kealing]. Despite the welcome media reception, American homemakers, the target demographic of the revolutionary food storage units, weren't picking up the trend. However, some direct salespeople who peddled Stanley Home Products sniffed out a promising product in Tupperware and began showcasing the items as part of their merchandise parties known as "Hostess Group Demonstrations," or hostess parties, in the late 1940s [source: PBS].

One woman who began independently selling Tupperware was Brownie Wise, a divorced, single mother in Detroit with a knack for hostess parties. Back then, housewives often covered dishes of leftover food with shower caps, but Wise emphasized that there was no longer any need to use those bathroom accessories in the kitchen [source: Kealing]. With their patented locking lids that made burping sounds as they expelled air from the containers, Tupperware storage units were a 1950s kitchen revelation. Properly "burping" Tupperware to get an airtight seal, flipping Tupperware upside down to prove it didn't leak and dropping the unbreakable plastic bowls on the floor were typical parts of Wise's lively Tupperware presentations. Housewives took to Wise as well, and her profits quickly rose -- along with her salesperson profile.

In 1951, as Earl Tupper's novel wares gathered dust in American department stores, he took a cue from Wise and others successfully selling Tupperware at hostess parties and abandoned in-store sales completely. He shifted the business model to direct sales only and created Tupperware Home Parties. In what was a landmark decision given the dearth of women in corporate-level jobs at the time, Tupper appointed Brownie Wise general sales manager of the new Tupperware division. Three years later, with Tupperware a leading household brand under her guidance, Wise became Business Week magazine's first cover woman [source: Smithsonian Institution].

Wise turned Tupperware into a lifestyle brand that appealed to a post-War generation of middle class women. After World War II, women who had entered the workplace as men fought abroad were ushered back home to care for their children and veteran husbands. In the 1950s, 20 million Americans fled city life for idyllic suburbia, which was swarming with pleasant neighborhoods populated by stay-at-home mothers [source: PBS]. Wise recognized the value of those women not only as kitchenware customers, but also as a potent sales force. Employment opportunities for these housewives were minimal, and Wise developed the Tupperware Home Party system to cater to their schedules and interests. By developing hostess gifts and sales incentives, such as the annual Tupperware Jubilee sales celebration at the company headquarters, Wise built a booming direct sales enterprise focused on women selling to women [source: PBS].

But by 1958, relations between Earl Tupper and Brownie Wise had soured. Tupper was notoriously media shy, and Wise had become the public face of his company. Disapproving of her brand emphasis on femininity -- despite the fact that Tupperware was geared toward housewives -- and her management style, Tupper and the all-male Tupperware board fired Wise [source: Kelly]. That same year, Tupper himself cut ties with the company, selling it to Rexall Drug company (which eventually became Dart Industries before it merged with Kraft Inc.) for $16 million, and high-tailed it to Costa Rica [source: Alfred].