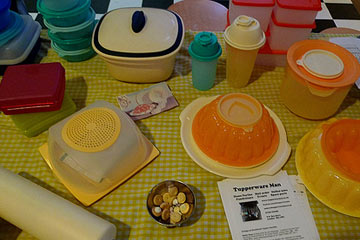 Vintage Tupperware has been lauded as culinary sculpture ever since the original Millionaire Line came out of the factory in 1947. Featuring 14 products, including tumblers, nesting bowls and their famous burping lids, Tupper's tinted his first polyethylene prizes either frosty white crystal or one of five pastel tones: yellow, blue, green, orange and pink. Art and design critics were dazzled by the slick plastic bowls and tumblers, and the Museum of Modern Art (MoMA) displayed the Tupperware Wonderlier Bowl as part of a kitchenware exhibit even before the brand became a household name in the 1960s [source: Kealing]. Though the company has struggled to retain cultural relevance, vintage Tupperware has never lost its appeal to the art world, as evidenced by its display in the MoMA yet again in spring 2011 [source: Labarre].

Today, Earl S. Tupper is immortalized in the Plastics Hall of Fame, and his vintage Tupperware pieces from the 1950s and 1960s have become collectors' items. A set of nesting bowls from the Millionaire Line can fetch about $45 on the antiques market [source: Fendelman]. Plenty of people also hang on to their retro pastel polyethylene, including Jell-O molds, salt and pepper shakers and deviled egg trays, which they either inherit from childhood kitchens or collect as adults. For all of its kitsch, vintage Tupperware, as it radically altered food preparation at home and gave housewives a way to bring in extra income to put dinner on the table, has also come to symbolize 1960s domesticity in the United States. Not to mention, plenty of older Tupperware remains in use, a testament to the plastic's durability.

The company has expanded its product offerings over the years to fulfill cooks' needs in American and international homes, creating, for example, culture-conscious offerings such as a rounded bread bin to accommodate circular loaves common in Indian kitchens. However, the Tupperware design aesthetic remained largely untouched until designer Morison Cousins gave it a facelift in 1990. In order to improve ease of use, particularly for elderly consumers, Cousins altered the Wonderlier Bowl's signature sealing top to include an enlarged opening tab and contrasting colored lid to the storage unit [source: Center for Universal Design].

Since then, Tupperware Brands has continued broadening its plastic pantry of products to include more innovative containers and cookware in a rainbow of color schemes. But without the uncanny success of Brownie Wise and her phenomenal Tupperware Home Parties, Earl Tupper may have never moved his polyethylene products into the mainstream.