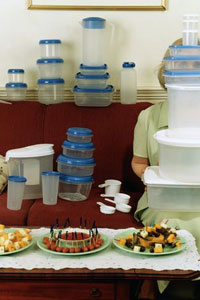 In the time that it takes to read this sentence, a handful of Tupperware parties all across the world have probably just started. The company estimates that a new Tupperware party kicks off somewhere every 3 seconds, but the gatherings aren't limited to the American suburbs where they first took off [source: Brown]. Despite their kitschy reputation, Tupperware parties take place in more than 100 countries, with 520,000 happening every year in France alone [source: Brady]. The get-togethers have also become popular elsewhere, including in India, with Tupperware managers hosting 3,000 every week in Delhi [source: Westhead]. And that's only a snapshot of the total number of Tupperware parties happening across the Asian country, where tens of thousands of women sell the plastic products [source: Singh and Shankar].

To throw a Tupperware party, consultants first find a customer willing to host it in his or her home. The host then invites friends, coworkers, family members and other potential customers for a Tupperware-themed event, during which guests can get an up-close look at the various products. Often, Tupperware party organizers will serve and possibly prepare food and beverages in Tupperware products to demonstrate their usefulness. Guests can then place orders for their own Tupperware products, which the consultant will process. In exchange for opening up their homes, Tupperware party hosts typically receive merchandise gifts proportional in value to the amount of Tupperware sold.

Tupperware parties remain the primary sales vehicle for the plastic kitchenware, but in 1988, the company made a radical change by offering catalogue shopping for the first time [source: Louie]. Since 1951, parties had been the only outlet for people to purchase Tupperware. Yet as profits and the Tupperware sales force shrank in the early 1980s, the company decided to expand its sales strategy to include catalogues and has since opened up online sales as well. In fact, Tupperware consultants can now throw virtual parties, which allow guests to browse and place orders online during a designated time frame.

Although it's Earl Tupper's invention that made the Tupperware Party possible, he can't take credit for this brilliant marketing strategy. Although the initial credit for in-home sales parties goes to Stanley Home Products salesman Norman Squires, a divorcee from Detroit turned Tupperware Parties into an American institution and a revolutionary way for married women to earn income.