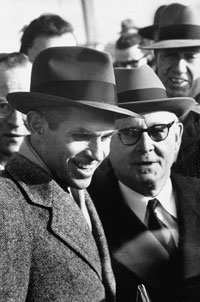 ­The Alger Hiss perjury case launched the career of then-congressman Richard Nixon, the head of the House Un-American Activities Committee­ (HUAC) that investigated potential Communist infiltration in the government.

Hiss worked for the State Department and was accused by former Communist Whitaker Chambers of being a Soviet agent. On Aug. 5, 1948, Hiss adamantly denied the charge before HUAC.

After Hiss filed a slander suit against Chambe­rs, Chambers produced a packet of typewritten and handwritten notes allegedly from Hiss, and later, strips of 35-mm film of State documents allegedly taken by Hiss. These were famously referred to as the "pumpkin papers" because Chambers had kept them in a hollowed-out pumpkin. As a result, Hiss was charged with perjury, or lying to the court while under oath.

­Hiss later admitted to writing the handwritten notes, but the source of the film and the typewritten letters remained contentious. After one jury could not come to a verdict agreement, a second case was mounted that eventually found Hiss guilty and sentenced him to five years in ­prison. Hiss maintained his innocence until his death.