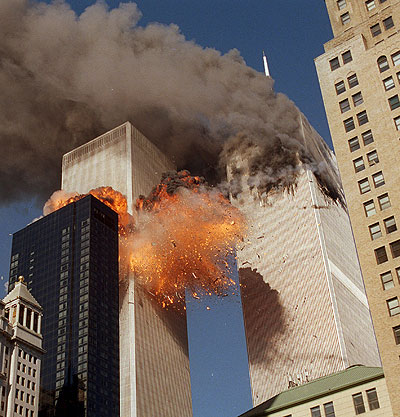 AP Photo/Chao Soi Cheong
Smoke billows from one of the towers of the World Trade Center and flames and debris explode from the other tower, September 11, 2001.

Are you the kind of person who likes to hear to a good conspiracy theory?

In the 21st century, one event reigns supreme in the catalog of conspiracy theories: the September 11, 2001 attack on the United States. This event is seared into the nation's consciousness and significantly affected the entire planet. It seems inevitable that people would cry "conspiracy" about any event with this much impact. However, the conspiracy theories around 9/11 have been strong and consistent.

­The whole controversy surrounding 9/11 boils down to one simple question:

Did 19 terrorists cause all of the destruction witnessed on 9/11/2001, or did a group of people in the U.S. government conspire to create that destruction for political gain?

The U.S. government has offered the terrorist explanation, and that is the story that many people believe. A large number of people, however, refuse to believe this "official story." They believe conspiracy theorists when they say that the U.S. government actually masterminded and executed the attack.

We could spend a great deal of time arguing one side or the other. Instead, we'll focus on the process. Isn't it fascinating that there can be two credible explanations for such a complex event, and that both explanations can be so diametrically opposed to one another?

How does a conspiracy theory like this get started? What is required to fuel it into a full-fledged public debate? Can the theory ever be proven? What does the possibility of the theory say about our society? In this article we will explore these questions and many others as we look at the events of September 11.


The dictionary defines a conspiracy theory in this way:

A theory seeking to explain a disputed case or matter as a plot by a secret group or alliance rather than an individual or isolated act. [ref]

A conspiracy theorist, therefore, is a person who formulates such a theory.

In modern times there have been a number of "conspiracy theories." One example is the assassination of John F. Kennedy. After the assassination, the government offered its explanation of the events. A large number of people (at one point, more than half of the adult population in the United States) simply do not believe the government's explanation. This particular conspiracy theory rose to such a high level in the public consciousness that an entire Hollywood movie was made about it: "JFK", directed by Oliver Stone and released in 1991.

The Kennedy assassination really started the modern "conspiracy theory" movement. This is an event where the "official" government explanation of the crime was openly ridiculed by a large number of "normal citizens." Many people believe that the Kennedy assassination was carried out as part of a larger government-centered conspiracy, rather than as a random event arranged by a single gunman.

In the same way, a very large number of people do not believe that "terrorists" carried out the events seen on 9/11. Instead, they believe that the government caused those events.

Next, we'll look at how conspiracy theories get started.