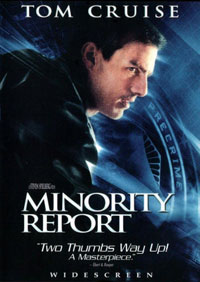 Pre-crime prosecution: the wave of the future?
Photo courtesy of Amazon.com

­Crime stories, especially stories about violent cri­mes, are often at the top of local news broadcasts. The news anchor explains the gory details of the murder, gives some background information about the victim and details the progress that law enforcement has made toward solving the crime­. But imagine if the news anchor instead said something like, "Today John Doe was arrested by law enforcement for the future crime of murdering his wife."

In the film "Minority Report," people with precognition (a form of ESP in which a person learns information about future events) provide a law enforcement department known as Pre-Crime with the names of both murderer and murder victim. Images relating to the murders are transferred to a computer so that officers can examine them to get more information. Instead of being arrested for crimes, people in the film are arrested for crimes that they would have committed.

Although the movie takes place in 2054 and is based on a science-fiction story, some people believe that Pre-Crime prosecution could actually become commonplace in the future. The realm of the paranormal has not yet entered into it, but a real-life future crime database would instead be based on a number of elements that could be interpreted as pointing toward future criminal activity.

If you've committed a crime, some of your personal information is probably already stored in various databases. Exactly what is stored depends on where you live and the nature of your offense. But proponents of future crime databases suggest that they include information about people who have never committed a crime. As this idea has gotten more attention, so has the concern over potential civil liberties violations. In short, future-crime databases are highly controversial.

Before we speculate about all of the possibilities, let's take a look at the databases that currently exist, starting with DNA databases in the United Kingdom and the United States.