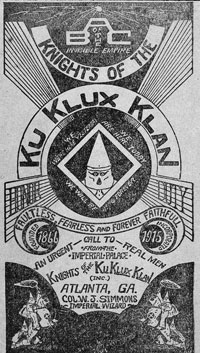 Illustrated cover of a brochure promoting a chapter of the KKK circa 1916.
Hulton Archive/Getty Images

­Set against the southern backdrop of Marietta, Ga., Leo Frank, a Jewish man, was accused of murdering Mary Phagan, a young white woman who worked with him in a pencil factory. The prosecution's arguments hinged on the testimony of a black janitor at the factory named James Conley. Conley said that Frank had killed Phagan and told Conley to dispose of the body. He also said that Frank had planted notes by the body blaming a black person for the crime.

Crowds inside of the courtrooms continually hurled Jewish insults during the proceedings, underlining the hatred that resonated during that era. The white supremacist group the Klu Klux Klan even formed the Knights of Mary Phagan in re­sponse.

Despite forensic evidence pointing to Frank's innocence, he was nonetheless convicted to death by hanging. As a result of the shaky evidence, the governor of Georgia commuted the sentence to life imprisonment. Subsequently, an angry mob kidnapped Frank from jail with little resistance and killed him by lynching.

In 1986, the Georgia State Board of Paroles pardoned Frank.