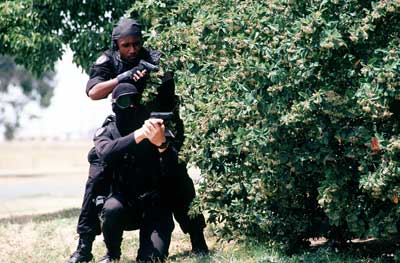 When the SWAT team initiates a raid, it forms a single-file line known as the snake. This minimizes the number of team members who present an open target to armed suspects, though it obviously maximizes the risk to the officer at the front of the line. This officer is known as the point man. It's his job to enter an unknown room first (after other team members have forced the door open, if necessary) and neutralize any suspects that he encounters. The point man is the officer who most often has to make split second decisions. Is the person rushing at him armed? Is that a suspect holding a gun? Is that a hostage or a suspect? Such decisions are literally matters of life and death.

If you've ever watched a fictional SWAT team in action in a movie or TV show, you may have noticed how each team member enters a room and quickly drops into a certain position or covers a certain part of the room. That isn't fictional, and it doesn't happen by accident. Each team member has an Area of Responsibility (AOR). The instant they make entry into a room, each SWAT agent immediately covers his or her AOR. This is planned so that the officers aren't in each other's way, and ensures that the entire room is covered as quickly as possible. However, just like the defense of a football team reacting to different offensive plays, the officers react and adjust their AOR in response to events going on inside the room.

As the SWAT team enters the room or building, they will yell loudly, or they might use a "flash-bang," a grenade that creates more light and noise than actual concussive force. The aim is to disorient the suspects for at least a few seconds -- usually enough time for SWAT to have them covered with their weapons and face down on the floor.

An enormous number of variables can affect the outcome of a SWAT raid. The best case scenario is one in which the suspects surrender or are disoriented long enough to be pinned and cuffed by officers. Roughly 90 percent of all SWAT call-outs end without the SWAT team firing a single shot. Of course, raids can go bad. If the suspect forces a confrontation, he may be killed by the SWAT officers. Officers themselves can be shot, and hostages can be taken out by angry suspects or errant police bullets. That's exactly what SWAT teams train to avoid.

Regardless of the outcome, once the situation is resolved, the SWAT unit's work isn't done. First, there's paperwork to fill out. More importantly, every SWAT call-out is subject to a review and evaluation. The team discusses positives and negatives, and it uses that information to direct its training and correct problems in future call-outs.

We'll look at some of the criticisms of SWAT teams in the next section.