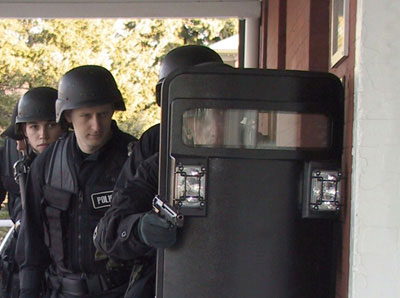 A police officer is on patrol when he gets a call about a domestic dispute. When he arrives at the scene, he finds that an armed man has taken his girlfriend hostage and barricaded himself inside his apartment. The officer calls for backup, but when the other officers arrive, they realize that their standard guns won't shoot through the barricades. They don't have surveillance equipment to see inside the apartment, which would give them crucial information about the assailant and the hostage. If the assailant starts shooting at them, they don't have body armor to protect them from his bullets. They could use gas to incapacitate him, but they don't have access to it. They haven't been trained to storm the apartment and incapacitate the attacker with minimal risk of injury to the hostage, the officers and the assailant.

Luckily, most police forces have a special unit with the equipment and training needed to resolve exactly this kind of situation: the SWAT team. A SWAT (Special Weapons and Tactics) team is an elite unit within a police force, used for exceptional situations that require increased firepower or specialized tactics. The officers in a SWAT unit have undergone special training and have access to an arsenal of weaponry, armor and surveillance devices beyond standard-issue police gear. Much of this gear comes in the form of military surplus.

Here are a few situations that typically require a SWAT team call-out:

The Los Angeles Police Department is generally credited with developing the concept of SWAT in the 1960s. Political and social turmoil in the United States during that decade led police to decide that they were unequipped to deal with certain violent situations. The Watts Riots in 1965 and the 1966 sniper attack at the University of Texas in Austin reinforced the fact that they needed special equipment and procedures. Daryl Gates, a high-ranking LAPD officer who eventually became police chief, is often mistakenly credited with coming up with the idea of adopting military weapons and tactics for police units. However, Gates did use his position within the force to promote the idea of a SWAT team.

Initially, the SWAT unit was viewed with great skepticism by police officials, politicians and even other officers. The original acronym, "Special Weapons Attack Team," was viewed as too antagonistic, so Gates changed it to "Special Weapons and Tactics." Two incidents cemented the SWAT team's place within the modern police force: a barricade stand-off with members of the radical militant Black Panther Party in 1969, and a similar situation with the Symbionese Liberation Army in 1974. The next year, a network television series called "S.W.A.T." further embedded the idea of a SWAT team into American consciousness. Police units using paramilitary tactics quickly spread across the country, first through major cities with violent gangs, then filtering down to smaller cities.

Today, about 90 percent of all police forces in U.S. cities with a population of 50,000 or more have some kind of SWAT unit, while 70 percent of smaller municipalities have them. That equates to roughly 1,200 SWAT teams in the United States [Source: National Drug Strategy Network].

Next, we'll look at how police forces recruit and train SWAT team members.